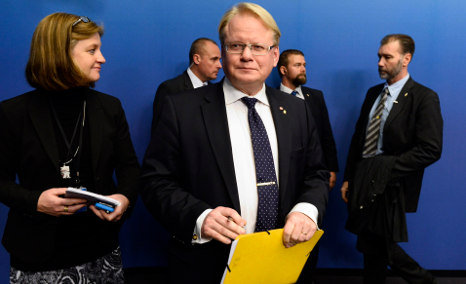 Sweden's new Defence Minister Peter Hultqvist. Photo: Claudio Bresciani/TT
What exactly has the Swedish military discovered?
We have received detailed information about the intelligence operation and we can concretely see that we had an intruder in Swedish waters, but we have not identified them. We think that this is totally unacceptable – that another country violates Swedish territory.
At a press conference on Friday, you announced a new national security council. What will that involve?
We need more coordination between the Prime Minister, Deputy Prime Minister, Foreign Minister, Internal [Home Affairs] Minister and the Defence Minister so that we can meet on a regular basis and discuss the security situation for Sweden and also make strategies that we can work through together between all these departments in the governmental office.
How worried should people living in Sweden be about the security situation here?
I think that there is a new security situation in the Baltic area and in the Baltic Sea. We see more exercises, we see more intelligence activities and what has happened now has confirmed that we are in another situation, if we compare this to the situation five or ten years ago. So I think we have a new environment and we have to handle that in some way. We are now planning a bill from the government next year – about Swedish military capabilities from 2016 to 2020 – and I hope that we can get this through parliament with a big majority.
But can you guarantee that people will be safe?
Yes, I think so. We have no immediate threat against Sweden but we have a security environment around us that has changed in a negative way and that is why we need to develop and deepen the discussions about how we cooperate with other countries.
So how are you working with other countries?
I think that it is important that Sweden and Finland should cooperate in a deeper way. I think the Nordic countries will no doubt cooperate in a deeper way. And we also have the Swedish partnership with Nato and the connection to the European Union and the United Nations. It is always important for Sweden to have this transatlantic link that we have developed during the years.