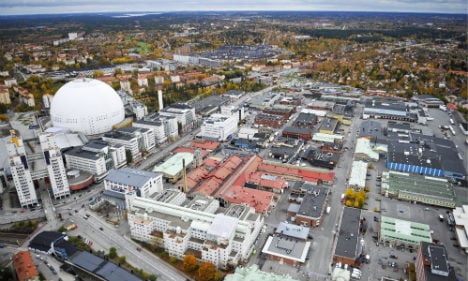 The Slakthuser area of Stockholm. Photo: TT
The plan to build a scaled down urban concept Ikea in the Slakthuset area near Globen in Stockholm were announced by former mayor Moderate Sten Nordin in January 2013. Nordin forecast that the project would lead to more than 1,000 jobs and 550 new homes.
A report in the local Årsta/Enskede newspaper however claims that the Social Democrat led governing coalition is sceptical over the plans, a claim denied by city planning commissioner Roger Mogert.
"IKEA has found a lot of constructive solutions in other cities, from Hamburg to Hong Kong," Mogert said.
The concerns over the project centre around the plans to establish thousands of parking spaces, which Mogert has now said will not be realized.
"4000 surface parking spaces is not an alternative we are considering. We will look at other solutions. We are building the city. The key factor, also for Ikea I suspect, is the establishment of a store in an urban environment," he said.
If the traffic situation can be resolved, Mogert argued that an Ikea store could mean a great deal to the area.
"This is a long term project with great potential that can be very positive," he said.