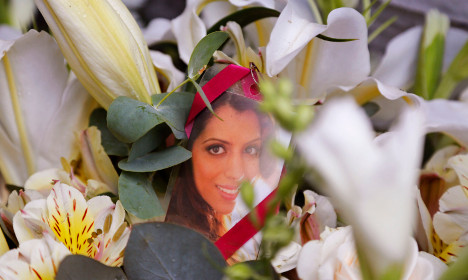 A tribute to Anni Hindocha in South Africa. Photo: TT

Francois van Zyl told a High Court in Cape Town that he would argue next week for the case against Dewani to be dismissed.

The 34-year-old is accused of orchestrating the murder of his Swedish bride Anni Hindocha while they were on their honeymoon in Cape Town in November 2010.

The prosecution has sought to prove that Dewani was gay and sought to escape his arranged marriage by hiring hitmen to kill his new wife.

Taxi driver Zola Tonga and accomplice Mziwamadoda Qwabe are already behind bars for their part in the murder.

The convicted hitman Xolile Mngeni died recently from a brain tumour while serving a life sentence.

But the prosecution case, which wrapped up on Monday, has been harshly criticised after several inconsistencies were found in Tonga and Qwabe's evidence.

A third key witness – hotel receptionist and supposed middleman Monde Mbolombo – admitted to lying during the trial that led to Mngeni's conviction.

Dewani also disclosed his sexuality at the start of the trial in October, undermining the prosecution's plans to put witnesses on the stand to testify about his affairs.

According to South Africa's Criminal Procedure Act, an accused can be declared not guilty at the close of the prosecution's case if the court feels there is no sufficient evidence to show he committed the crime.

Dewani's lawyers are expected to file papers seeking the dismissal on Wednesday before arguing their case next Monday.

Dewani has maintained that he and his 28-year-old bride were hijacked at gunpoint as they drove through Cape Town's impoverished Gugulethu township in a taxi.

He returned to Britain shortly after her murder and fought extradition for three years before being returned to South Africa in April.