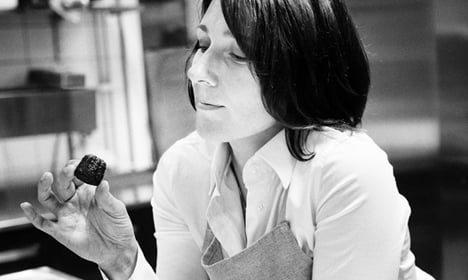 Sophie Maillard’s eyes sparkle with excitement as she meets with The Local to share her unfolding story of how she’s introducing Sweden to canelés – a French pastry from Bordeaux.

She's been in the country since 2009, when she moved to Stockholm together with her husband and newborn baby. Then aged 35, she was ready to end a long career in the French military and eagerly embraced the change of coming to Sweden and taking a more creative direction.

But despite having many passions, she initially wasn't sure which to pursue. In the meantime, unable to get hold of one of her favourite French pastries in Stockholm, she started to bake more canelés – pastries with a soft and tender custard centre and a dark, thick caramelized crust. Canelés are quick bites, enjoyed in a variety of ways. Photo: sophiescanele.se

Two years ago, after a Swedish friend enjoyed her homemade versions, the entrepreneurial project Maillard had been waiting for presented itself and she turned her hobby into online business Sophies Canelés in 2013.

She also started selling her canelés at Kafe Esaias in Stockholm and now delivers her homemade French pastry to various places around the capital. Now she wants to make the Bordeaux-born snack famous in Sweden.

“Swedes are not unfamiliar with French baking, but they don’t really know what a canelé is just yet,” she says.

Maillard argues that canelés haven’t been given the same opportunity as other, more famous, French treats such as the macaroon – the visually pleasing and taste bud tickling bite which is now something of a celebrity sweet snack around the world.

Maillard admits that canelés are unlikely to prove as popular. But she says they have great potential because the small bites work just as well with champagne or white wine at an evening event as they do with coffee or tea as part of a traditional Swedish afternoon fika. She believes that there is definitely space for a new sweet snack in a nation already obsessed with cakes and famous for good cafes.

“I’m tired of their punsch-rolls, chocolate balls, and kanelbullar,” she chuckles.

Appreciating the need to evolve in order to establish canelés in Sweden as a traditional pastry, she now plans to set up her own physical space – a combination of a cafe and a bakery – to better communicate to Sweden what a canelé is.

“Sweden’s best at cafes, I’ll use that, as well as the organizational aspect and the respect and trust shared at the workplace [here]. From France I'll take the tradition, the recipes, and the history of food.”

Maillard believes now is the perfect time for more French products like hers to start trending in Sweden.

“Scandinavia is at the forefront when it comes to culinary trends and influences, and this is something that the rest of the world sees. Sweden wants to develop it's food industry – it’s the best place to create a new concept with food.”

She also hopes to inspire other international expats living in Sweden to pursue their dreams.

“When you come to a new country you have to ask yourself what you’re good at and what you enjoy doing. Every day should be done with pleasure and delight!”

“Always get inspired and be brave!”.