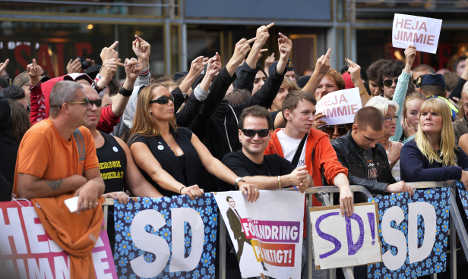 Sweden Democrat supporters at a pre-election rally. Photo: Anders Wiklund/TT
The mean age for Sweden Democrat voters in the 2014 general election was 45 to 64, according to research conducted by Swedish think tank Timbro and presented in Sweden's Dagens Nyheter (DN) newspaper on Tuesday.
The study also revealed a more even distribution of votes between men and women compared to previous years and suggested that more high earners had voted for the party compared to in 2010.
The Sweden Democrats became the third largest party in Sweden in September after scoring 12.9 percent of the vote in national elections.
More voters switched to the Sweden Democrats from the centre-right Moderate Party than from any other political group, according to the Timbro study.
How the Sweden Democrats went mainstream
Eighty per cent of respondents who chose the nationalists said that immigration policy was the main reason they had selected the Sweden Democrats.
Political analysts say this suggests that most voters had ideological reasons for choosing the party.
"Therefore it is not about protest votes, which was previously often given as the explanation for right-ring populist parties' success," Anders Sundell, a political scientist at the University of Gothenburg told DN.
Timbro reached its conclusions after speaking to almost four thousand randomly selected Swedes who participated in an online survey.
The Sweden Democrats are currently led by Parliamentary Group Leader Mattias Karlsson, while their usual spokesperson Jimmie Åkesson is on sick leave with exhaustion.