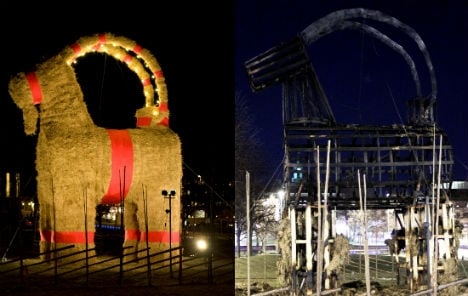 Gävle's 2013 Christmas goat pictured before and after its arson attack. Photo: TT Nyhetsbyrån

Every year the massive straw goat attracts a media storm with locals dreaming up new ways to protect the 13 metre high creation.

Despite their efforts, including spraying the goat in anti-flammable liquid, the goat usually goes up in flames long before Swedes have opened their Christmas presents, in what has become an annual tradition.

For 2014, organizers have got a new plan to keep the goat intact throughout the yuletide period. They are set to temporarily move the local taxi rank from its present location to the main square where the goat will be erected.

"If more people are moving around the goat then we believe that will discourage people from attacking it," Johan Adolfsson, spokesperson for the goat committee told the Arbetarbladet newspaper.

Adolfsson reckons that having more people circulating around the goat at night and during the weekends could prevent it from being set ablaze.

Organizers have also hired a private security firm to guard the goat, but it won't be a round-the-clock service because that was deemed too expensive. Last year's attempt lasted until December 21st when it was burned to a crisp. Officials had told The Local last November that the goat of 2013 "would be much harder to burn down."

The goat has made headlines in the past after Swedes tried to kidnap the structure by helicopter and after some youths got suspicious goat tattoos shortly after it burned down last year. Once, an American tourist was convicted of arson after he burned it to the ground, thinking it was a harmless tradition and not realizing such an act was indeed against the law.

Indeed, the goat has been burned to the ground more often than it has been left standing. It was first torched in 1969 while the goat of 1977 only got to bleat for six hours.

Since the first goat was put on display in 1966, it has been set on fire 24 times. The latest attempt will start being assembled on Thursday and be unveiled on November 30th.

As for the Gävle goat itself, which generated a sizeable Twitter following last year, it has yet to comment on its chances of survival this time around.