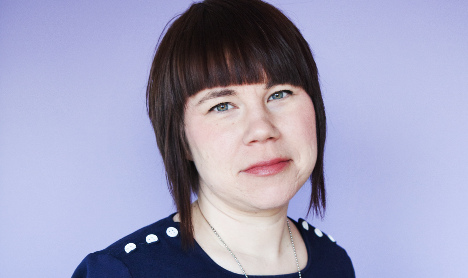 Kristina Ljungros from the sex education group behind the contest. Photo: RFSU
The idea for the contest emerged after a member of RFSU – a national not-for-profit organization which aims to promote an "open, positive view of sex and relationship issues" – brought up the absence of a specific word for female masturbation in the Swedish language at a bi-annual meeting of the group in 2013.
"Rather than sit around amongst ourselves talking about it, we thought we would launch a nationwide competition," Kristina Ljungros, a spokeswoman for the association told The Local.
"We are trying to put sexuality on the agenda – the positive aspects, not just the negative ones like sexual abuse. We want to focus on the good parts, the lust".
"When it comes to masturbation, people mostly think about just men doing it and we don't think of it as common for women. If we don't have a word in the language, how can we even talk about it?" she argued.
RFSU received more than a thousand entries when it launched the competition for the new word earlier this month and has since compiled a shortlist of 34 words, which the Swedish public can vote on between now and Sunday.
"Klittra", "pulla" and "selfa" are among the suggestions.
The most popular three words will be voted on by the RFSU's committee in June 2015.
"So many people have been discussing the competition all over Sweden so it seems that people agree that there is something lacking in the Swedish language," says Ljungros.
The RFSU spokeswoman accepts that the debate over the word is one that would be much more of a taboo in many other countries.
She believes that Sweden's "more liberal attitude to sex" than some places is one reason, alongside the fact that the nation champions gender equality.
"But the absence of one commonly used word for female masturbation suggests that we still don't have gender equality here in Sweden," she added.
"Hopefully this is another step towards that".