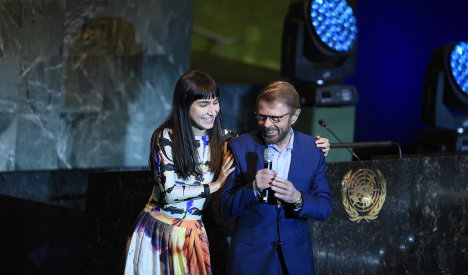 Swedish artist Laleh alongside Björn Ulvaeus. Photo: Björn Ulvaeus
The Abba star – who remains one of Sweden's best known musicians – has long championed emerging singers and producers from his home country.
His comments about the global streaming company came as he appeared alongside double platinum selling Swedish artist Laleh, who performed a cover of Abba's hit Chiquitita at the 25th anniversary of the UN Convention on the Rights of the Child in New York City.
"I’m proud of the great producers, songwriters like Max Martin and also of all innovative young people that create games, and companies like Spotify. Sweden is really good at innovation," he told The Local.
Speaking about the shift towards music streaming from digital and physical sales, he added:
"There was no choice but to evolve. Before Spotify there was illegal downloading and that was taking all the revenue away from the record companies and the artists. Spotify is huge in Sweden. And yes, the writers don’t make as much money, but it’s better than making no money at all."
Read The Local's full interview with Björn Ulvaeus
His comments follow US star Taylor Swift's decision to remove her albums from the streaming service as complaints continued that the service was not generating enough money for artists.
"I’m not willing to contribute my life’s work to an experiment that I don’t feel fairly compensates the writers, producers, artists, and creators of this music," she told Yahoo News.
The move led to a global debate about Spotify which led to the company's CEO publishing a blog post complaining about "all the talk swirling around lately about how Spotify is making money on the backs of artists”.
In his post, Ek said that Spotify had paid out more than $2 billion in royalties to labels and publishers.
“A billion dollars from the time we started Spotify in 2008 to last year and another billion dollars since then. And that’s two billion dollars’ worth of listening that would have happened with zero or little compensation to artists and songwriters through piracy or practically equivalent services if there was no Spotify,” he wrote.
This week, Spotify announced it planned to boost its staff numbers by a third amid increasing competition from other technology companies.