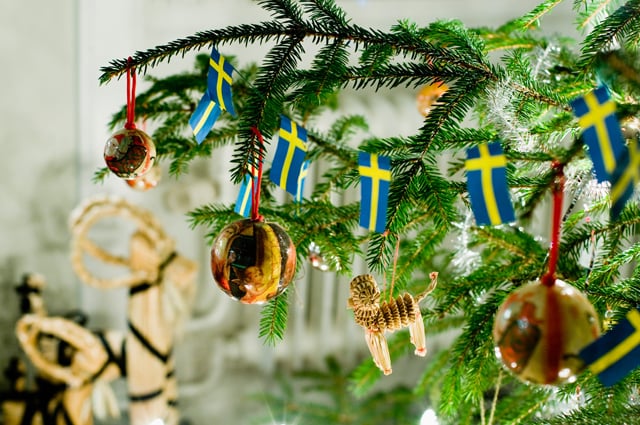 Swedes may be some of the most secular people in the world, but they sure do love celebrating Christmas. Who can blame them? Winter is dark and dreary, and the chance to light it up  with a bit of holiday cheer is irresistible.

In December the streets are filled with shoppers, and tinsel garlands and stars are hung from building to building. Christmas markets open many towns and the air is filled with the scent of candied almonds and warm spiced glögg.

And homes are not neglected – in fact, they're the most important part. Welcome to The Local's guide to Christmas decorating, Swedish style. (PS – click the links to shop certain items in The Local's webshop)

1. Candles in every room

The first step of Swedish Christmas spirit is to light a load of candles. Thousands, even. There's even a song about it. There should be a candle (or three) in every room and in every window. (Just don't leave them burning when you leave).

Swedish tradition offers a plethora of beautiful options to choose from, including simple brass holders, red wooden holders and candelabra, and advent candle holder sets. Many households use triangle-shaped sets of electric candles for advent as well. The only rule is to light up the dark Swedish winter!

As we already established, Swedish Christmas is all about candles, warmth, music, and light. So in addition to your normal Christmas tunes and your candles in every window, make sure to have one of these charming little advent chimes (änglaspel).

The heat from the four small candles moves the cherubs around in a circle, chiming and producing a lovely little background melody for your festivities.

You can't have Swedish Christmas without celebrating Santa Lucia first, as any Swede would tell you. And although the beauty-pageant aspect of the tradition is on the wane, it's still a family tradition for the kids to dress in white, bear candles and warm saffron buns, and sing traditional songs.

The girl (or boy, nowadays – why not?) chosen to play Lucia herself usually wears candles in her hair – traditionally real candles, but usually batter-operated or plush today. Boys traditionally wear pointed white hats as 'starboys'.

Thought candles were enough? You thought wrong. Light up the dark both inside and out with advent stars. These stars, usually made from paper or metal, are hung throughout cities as well as in the windows of many homes. The star has been used in Sweden since at least 1894,  and quickly became all the rage.

The star is meant to represent the Star of Bethlehem, and is lit up on the first Sunday of Advent. Most Swedes don't turn them off until January.

Midst the bleak, grey winter, Swedish Christmas also demands a touch of green. Wreaths are hung on doors both inside and out, either evergreen or made of straw. Wreaths can be circular or heart-shaped.

For an extra bit of life, many Swedes also buy hyacinths for Christmas. The flowers are sometimes planted in advent candle holder tins, and are meant to bloom in time for Christmas.

Although the modern American version of Santa Claus (based on the Dutch tradition) has been gaining traction in Sweden and has largely claimed the name of 'Tomten', the traditional Swedish 'jultomte' (Christmas gnome) was indeed a little old gnome with a long grey beard.

Today children are still brought presents by a tomte (usually a relative in a Santa suit), but the traditional tomtar and nissar (elves) make their appearances in ornament and other little figurines around the home.

Reindeer, you say? Nej, when it comes to Christmas, Swedes prefer a goat.

The Yule Goat has its origins in pagan tradition  and may have connections to the Norse god Thor, whose chariot was drawn by goats. In more recent times the goat has been presented as a mischievous, rowdy figure, sometimes demanding gifts and sometimes giving them.

Another tradition was to hide secretly the straw goat in a neighbour's house. When the family pranked discovered the goat, their task was to hide it in someone else's home.


A traditional Swedish Christmas ornament, a star made of straw. Photo: Jurek Holzer/SvD/TT

Do you see a theme here? Swedish Christmas is full of straw. In addition to straw wreaths and straw goats, many Swedes decorate their trees with straw ornaments.

The traditional ornaments come in a variety of traditional shapes including several varieties of stars, angels, pine cones, and – of course – goats. The golden straw is bound with red string and red accents.

Of course, golden straw isn't the only ornament to grace the tree. Other common decorations include woven paper hearts and surprisingly-patriotic strings of Swedish flags. And why not a few Dala horses or reindeer?

9. Kitsch in the kitchen

As with many cultures, Christmas in Sweden also means plenty of fun in the kitchen. Families and friends spend hours baking saffron and cinnamon buns, Christmas breads, cookies, and more. Caramel knäck snacks and glasses of glögg are also a must.

The kitchen must not be neglected when it comes to festive decorations. Many families have special Christmas tea towels, dish rags, bread bags, table cloths, cookie cutters, and baking forms. And don't forget the candles!

Finally, don't forget to share your Christmas joy. While Swedes have a reputation for being reserved and not interacting much with their neighbours, Christmas is a bit of an exception. If you want to do things right, send out those Christmas cards – you're guaranteed to get a few in return.

Swedish Christmas cards can be modern and feature any winter theme, but also frequently show more traditional artwork, such as the old-fashioned jultomte or reindeer. Receiving a Christmas card is no trifling matter – put it on display in the hall or kitchen, and keep them there all month long.

This article was written for The Local Brands. Explore the Christmas section here.