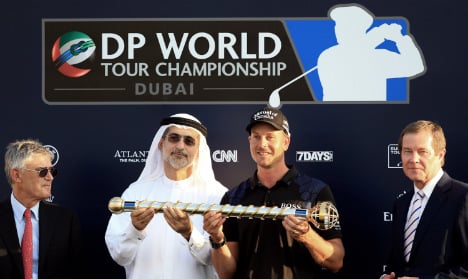 Ireland's Shane Lowry (66) was alone in fifth place at 13-under par, while England's 22-year-old Tyrell Hatton (70), Sweden's Robert Karlsson (69) and South African Louis Oosthuizen (66) were tied for sixth on 12-under par.

The Swede seemed to have put himself out of contention when he made a rare blunder on the Earth course of Jumeirah Golf Estates, slicing his tee shot with an iron out of bounds for a double-bogey six on the par-four 11th hole.

Stenson was tied with Spain's Rafael Cabrera-Bello until then, but conceded two shots to his consistent playing partner.

He then made a crucial 12-foot putt for par at the 12th, while Cabrera-Bello ended up with a bogey and the lead was down to one.

Still leading by one shot after 15 holes, Cabrera-Bello's chances met a watery grave on the par-four 16th, when he found the fairway bunker off the tee and ended up making a double-bogey after hitting his third shot into the water.

The Spaniard was completely out of the race when he hit his tee shot into water on the par-three 17th for a second successive double-bogey.

However, neither could take advantage of their tee shots on the par-five 18th, and were joined on 14-under par by Dubuisson, who picked up a shot on the last.

"Again, it was hot out there, and it was a tricky day. On the back nine the wind picked up and I didn't play my best, and I had a shocking hole on 11 and that kind of put me back.  But I didn't give up.

"I was hanging in there and made a couple of important par putts on 12 and 16. That kind of kept me in the ballgame and hit it to a foot on 17, and had a one-shot cushion up the last there and hit a lovely pitching wedge that secured it.

"I've had a couple close calls this year to get my win and it wasn't to be earlier. Eventually you get something if you stick around, and I surely did that today so I'm very pleased with that."

The new European number one McIlroy could not win the two trophies he was aiming for, but he said he would have been surprised if he had won the tournament the way he had been playing all week.

"It could have been different. But at the same time, I never expected 14 under to have a remote chance of winning this golf tournament," said McIlroy, who had already won the Race to Dubai before the start of the week.

"It just seemed like no-one really took the tournament by the scruff of the neck and went with it.  The two guys, Rafa and Henrik, were on 16 for quite a while, and sort of stayed there.

"I just didn't play well enough to win this week, and if I had have won by playing like that, it would have been a bit of a surprise."