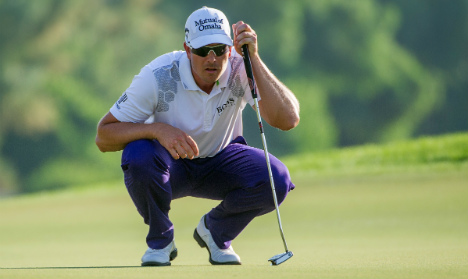 The Spanish world number 104 shot a seven-under par 65 – the low round of the day for a second successive day – and finished on 14 under par 202 after 54 holes, the same as Stenson, who shot a bogey-free round of 68.

It was the Swede's 12th consecutive round in the 60s on the Earth course of Jumeirah Golf Estates.

The leading duo are now three clear of Englishman Justin Rose, who leads the chasing pack at 205 following a round of 68.

World number one Rory McIlroy once again endured a difficult day. The 2012 champion, who is already assured of becoming the European number one for the season by winning the Race to Dubai, made rare back-to-back double bogeys en route to a two-under par 70.

McIlroy will start the final round four shots behind Stenson and Cabrera-Bello, tied for fourth on 10-under par with Frenchman Victor Dubuisson (67), England's Tyrell Hatton (68) and Denmark's Thorbjørn Olesen (69).

It was a bit of a battle for Stenson early in the day, when he three-putted for par from 20 feet on the par-5 second, and then needed to make and up-and-down for par on the third before a chip-in for his first birdie of the day on the fourth.

After another missed birdie chance on the par-5 seventh hole, where he failed to make a four-footer putt, the 38-year-old shifted gears and made three birdies coming in for his 68.

Stenson, who is yet to win a tournament this year despite a solid season, said: "It's a great championship, this one, and of course it would mean a lot to me to defend, and to get a win this season.

"It's still been a good one, but still at the end of the year when we assess it, we will always look at the trophies and there has not been any yet.

"We'll try and make it happen, but there are a lot of strong players out there and Rafa seems to be on fire. We'll see if we can hold him off tomorrow.

"I struck it nicely today. I would say I was back to hitting it really good and had quite a few chances, but wasn't as hot on the greens as I was yesterday. Left a couple shots out there but all in all, I'll take that round. I am still in the race."

Cabrera-Bello, who needed just 21 putts to go through his round, finished with four birdies in his last five holes.

And the Spaniard said his strong short game saved what could have been an ugly round.

"It's been a little crazy round, because I haven't felt I've played perfect at all. I had to work really, really hard, especially at the beginning.

"I just managed to hang in there," said Cabrera-Bello, winner of the 2012 Desert Classic.

"I end up shooting three?under on the front nine and I could have easily shot two or three over, which was very good. And short game and putting has been unbelievable, probably the best day of my life for short game."

McIlroy also did not have the best start when he could not make a birdie in the first four holes, but he appeared to be motoring along as he shot to the top of the leaderboard with four birdies in the next six holes.

But he then hit two wayward shots off the tee on the 13th and 14th and was penalized with back-to-back double bogeys.

"I definitely felt like I played better than yesterday, even though the score is the same," said McIlroy.

"The 12th and 13th, obviously, ruined that scorecard a little bit.  If I had not had those two holes, I would be right up there in the lead.

"It makes life a little more difficult for myself tomorrow, but hopefully I can get off to a fast start and try to put pressure on the guys ahead of me."