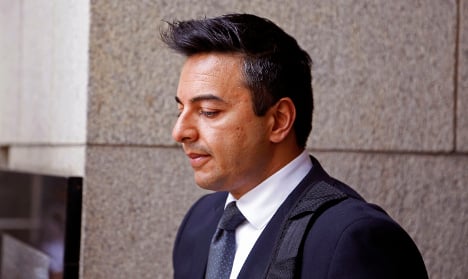 Dewani's lawyers applied for his discharge at the end of the state's case, claiming the evidence against him was so full of holes he should be acquitted immediately without having to testify in his defence.

Dewani, 34, is accused of organising the murder of his 28-year-old Swedish bride Anni Hindocha during their honeymoon in South Africa in November 2010.

Prosecutors say he hired hitmen to kill her in a staged hijacking because he is a gay man who felt trapped into marriage by family pressures.

The millionaire and his bride are both from wealthy families of Indian origin and the two groups of relatives faced each other across the courtroom Monday, as they have done since the trial began in October.

Dewani, in a dark suit and tie and with his greying hair cropped short, glanced nervously about the packed, wood-panelled Western Cape High Court from the dock as his lawyers fought for his freedom.

He has admitted being a member of gay websites and having paid male prostitutes for sex, but says he is bisexual and loved Hindocha. Dewani says they were hijacked while in a taxi by armed men who forced him out of the vehicle at gunpoint before driving off with Hindocha and later shooting her.

The driver of the hijacked taxi and one of the hijackers – both serving long jail terms for Hindocha's murder – have testified that Dewani hired them for 15,000 rand ($1,300) to stage the attack and kill his wife.

Dewani's lawyer, Francois van Zyl, argued that their evidence was full of contradictions and "cannot safely be relied upon".

According to South Africa's Criminal Procedure Act, an accused can be declared not guilty at the close of the prosecution's case if the court feels there is insufficient evidence to show he or she committed the crime.

After hearing arguments from both the defence and prosecution, Judge Jeannette Traverso is expected to rule on the application later this week.

Dewani returned to Britain shortly after Hindocha's murder and fought extradition for three years before being returned to South Africa in April.