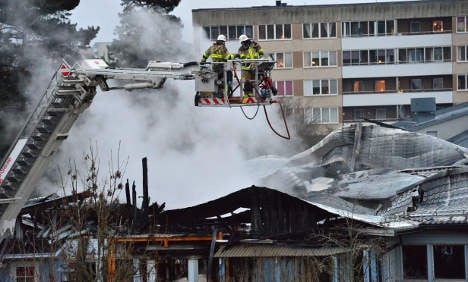 The preschool in Stockholm. Photo: TT
Rescue teams told the TT news agency that they had been forced to let the building "burn down" because it was too dangerous for firefighters to enter the preschool on Sunday night.
Around eighty children attend the preschool, which is in Östberga, to the south of the Swedish capital.
It had recently been renovated, with work only completed last week.
No one is believed to have been hurt in the fire.
The school's director Ylva Marten said she was "very sad" about the disaster.
"You think of all the drawings…in a sense their childhood is going up in smoke," she told Swedish news network SVT.
Police were called to the building at around 1.30am. Officers say it is unclear who or what started the fire but they have launched an arson investigation.
"We have no witnesses who saw anyone suspicious run away, and no one has been arrested," John Larsson, a spokesperson for Stockholm police told SVT.
Firefighters, police and ambulance staff remained at the site on Monday afternoon.