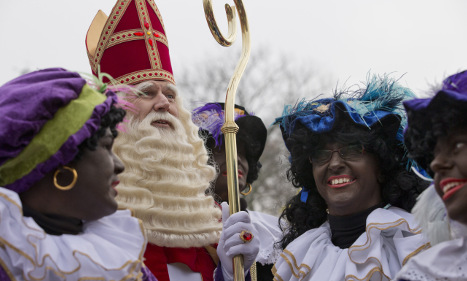 A festive parade involving Zwarte Piet helpers in the Netherlands. Photo: TT
Sweden's Afro-Swedish National Association wrote to the Dutch embassy in Stockholm earlier this month to protest against a party planned on its premises on November 30th, at which the character was set to appear.
Black Pete – or Zwarte Piet as he is known in Dutch – was due to arrive at the embassy following a public boat ride from Djurgården to Slussen in Stockholm.
The character is usually played by someone wearing black face paint and a wig and regularly appears alongside Saint Nicholas at seasonal Sinterklass celebrations in the Netherlands and Belgium.
But Swedes with African heritage alongside anti-racism campaigners across Europe argue that the idea promotes offensive stereotypes of black people.
The Sinterklaas festival dates back to the 1600s and Zwarte Piet started appearing alongside the white bearded figure in the 1800s.
Some Dutch argue Zwarte Piet is black because of the soot in the chimneys he climbs down to take gifts to children, while others have noted that his emergence coincided with the Dutch Empire's involvement in slavery at that time.
The Local speaks to Sweden's Afro-Swedish National Association
It has now emerged that the Dutch club is scrapping the boat ride idea and said that there will be no black Zwarte Piet helpers at the party.
"We respect the feelings and opinions of different groups…and will not portray Piet as a black painted helper anymore," it said in an online statement.
But it is understood that the character will still appear in some form at the club's event, which is still scheduled to take place behind closed doors at the Dutch Embassy.
"He will look a little different, maybe have a different colour on the face. I do not really know. It is difficult to change the celebration entirely," Frank Schipper, a spokesman for the embassy told The Local.
"This is a long tradition and it is for the children at the embassy. It is up to the Dutch club to set the details," he said.
"We have of course had discussions with them and the main goal is not to insult anyone".
Zakaria Zouhir from Sweden's Afro-Swedish National Association told The Local:
"Of course we are glad this has happened after we put the pressure on them, but I must say the embassy hasn't been respectful in its communication – we found out the party was stopped from the media. We haven't had a reply to our complaint letter".
He added: "We still think the practice is unacceptable and should be stopped everywhere in the world."