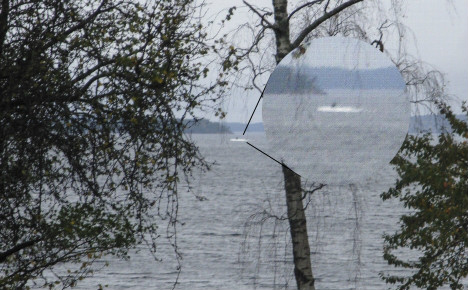 An enlarged look at the mystery sighting of a suspected submarine in the Stockholm archipelago in October. Photo: TT

The research was carried out by Sifo after the military said it had "conclusive evidence" that a foreign vessel was illegally present in Swedish waters in October.

People who participated in the survey were asked the following question: Do you believe the armed forces when they say they have conclusive proof that a submarine from a foreign power was in the archipelago during the autumn?

75 percent of respondents said yes, 14 percent were unsure while 11 percent said they didn't believe the Armed Forces had conclusive evidence.

The findings of the survey were deemed to be an "exciting result" according to Fredrik Bynander from the National Defence College.

TIMELINE: Search for submarine in Stockholm

"Our recent history is rather forgotten. I think we would have seen a different picture if the old mentality persisted," Bynander told Sveriges Television news.

He added that during previous submarine hunts in the 1980s that the public were more sceptical about what the military were telling them.

Bynander also stated that journalists during the Cold War era were more up to speed with defence and asked tougher questions of the powers that be, which he stated was a contrast to how the press covered the recent submarine saga.

"The media coverage has been very positive about the way the armed forces presented their information. It was a line-up of politicians who supported their version of what happened," said Bynander.

Earlier this month the Swedish Armed Forces confirmed that a submarine had violaed Swedish territorial integrity. They said that analysis of the intelligence operation was "unambiguous."

"There is no doubt, we have excluded all other explanations. Swedish territory has been seriously and unacceptably violated by a foreign power," Supreme Commander Sverker Göranson told the press on November 14th.

However the military were unable to determine which country it came from.

Warships, minesweepers, helicopters and more than 200 troops scoured an area about 30 to 60 kilometres (20 to 40 miles) from Stockholm in October following reports of a "man-made object" in the water, but the search was called off after the Swedish military said it believed that the suspect vessel had moved on.

Swedish Defence Minister Peter Hultqvist recently told The Local that the security situation in the country had changed.

"We have no immediate threat against Sweden but we have a security environment around us that has changed in a negative way," he said.