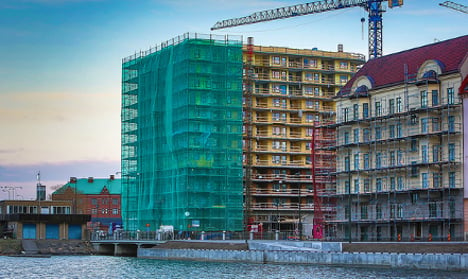 A housing development in Malmö. Photo: Flikr/Anders Bengtsson
Growing levels of household debt and a complex housing market which has stopped many from investing in property are among the key problems for Sweden, according to the OECD.
It has lowered its growth forecast from a previous prediction of 3.1 percent, to 2.8 percent.
But the organization also notes that Sweden's export market is picking up and that "consumption continues to grow steadily".
"Job creation will gradually bring unemployment down, against the background of an expanding labour force," the OECD adds in a statement on its website.
"Tackling rigid employment protection and gaps in activation policies for disadvantaged groups would foster a stronger and more inclusive recovery," the organization concludes.
The OECD says that Sweden's future fortunes could also be influenced by events elsewhere in Europe, citing weakened business confidence and investment as the biggest risk for Sweden.
"But a stronger than expected growth in the EU and other major trading partners would improve growth prospects considerably," writes the OECD.
Global growth is expected to improve slightly in the coming years, but with large differences between countries.
The OECD believes it will reach 3.3 percent this year, 3.7 percent in 2015 and 3.9 percent in 2016.
These figures are also revised predictions. In Spring 2014, the organization predicted a growth of 3.4 percent this year and 3.9 percent next year.
The mission of the Organisation for Economic Co-operation and Development (OECD) is to promote policies that will improve the economic and social well-being of people around the world and it regularly carries out detailed studies of different countries and their economies.