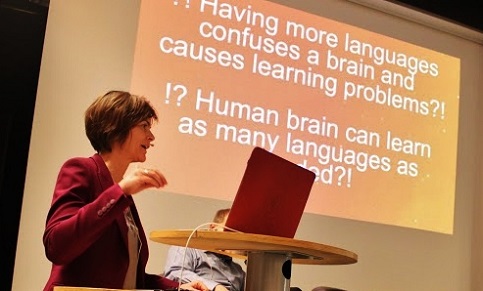 In an increasingly globalized world, education runs the risk of falling behind. As countries and cultures become more interconnected than ever before, schools are sometimes slow to adapt, remaining tied to traditional methods.

While debates about how to reform schools rage on in Sweden and other parts of the world, one question that sometimes gets lost in the shuffle is what makes a school a “good” school.

“Money has very little to do with it,” said Kalle Bengtsson, a director at consulting firm McKinsey’s Stockholm office. “Good school results can be achieved by systems that spend relatively little money, like Finland. And some of the systems that have the highest spend deliver mediocre outcomes as measured by PISA, TIMMS and others.”

The comments came during a panel discussion held on Thursday at the Stockholm International School (SIS) in conjunction with International Education Week.

Bengtsson, who is also a member of the SIS Board of Trustees, explained that his thinking about what makes a good school stemmed from his work advising schools throughout Europe and elsewhere.

“About seven or eight years ago we were asked by schools in the Gulf States if we could help them build a really good school,” Bengtsson explained. “Which brought up the question – what does ‘good’ really mean when it comes to schools?”

McKinsey visited schools that kept coming out near the top of the PISA rankings compiled by the OECD – and then went to schools that had improved the most over a period of time.

In the face of struggling school results back home in Sweden, Bengtsson offered his insights into what makes a school effective, and how Sweden’s schools can be improved.

Rather than money or central reforms, the key factor is how teaching practices are developed at the school level.

Bengtsson cautioned that what actually works can vary widely among schools, even within one country, let alone internationally. But there were some common factors, he added.

“At the schools with the best results, teaching is a highly-valued profession and the teachers are high-quality.”

Bengtsson has been involved in helping the city of Stockholm develop a school improvement programme, PRIO, to improve results. PRIO will be gradually implemented at 150 primary schools throughout Stockholm – but Bengtsson warned that effective reforms take time.

“We discovered at the most-improved schools that effective reforms take a minimum of six years to achieve results,” he explained.

Reflecting on what makes a good school wasn’t the only theme addressed at the Stockholm International School’s event, which brought together four experts for a discussion on themes ranging from study abroad to multilingualism.

Radosveta Dimitrova, a researcher from Stockholm University and Karolinska Institute, discussed the elements of well-being and positive development in various school environments, including schools in Sweden and Bulgaria.

Antonietta Oppenheimer, an advisor with the Fulbright Commission, spoke about the selection process of Fulbright Scholars, the premier foreign study programme funded by the United States government, which also launched International Education Week back in 2000 to promote and celebrate education and collaboration worldwide.

The event is observed every November at institutions across the globe, including Stockholm, a city which has a history as an international hub in Europe and the Nordic region, and home to thousands of foreign professionals, expats, and diplomats, as well as several international schools.

The Stockholm International School (SIS), housed near St. John’s Church in central Stockholm, is the oldest one, and has long been a meeting-place for new thinking on education.

More new ideas emerged at Thursday’s talk thanks to Marta Medved Krajnovic, the Director of the Stockholm International School and professor of applied linguistics. Krajnovic spoke about multilingualism – a subject close to heart for many of the audience members.

SIS itself was founded in 1951, and by the end of its first year its student body boasted 15 different nationalities. Today, with 600 students that number is 65 – making for a linguistic landscape that poses certain challenges for educators.

“Multilingualism must be maintained,” Krajnovic said, “Research shows that a five-year-old’s first language starts deteriorating after just a few months in a new linguistic context.”

But as long as languages that one already possesses are consciously maintained, there is no reason why new languages should not be learned, Krajnovic added, addressing the misconception that too many languages “confuses the brain”.

“Learning languages is an individual and non-linear process,” Krajnovic explained.

“And yes, certain academic tasks in a new language require large amounts of cognitive effort and energy. But if enough time is taken, if there is motivation, if the language is used, developed and maintained, then the final result is always positive.”

Stockholm International School, which offers a truly international education for preschool through grade 12, is a hub of multilingualism – and Krajnovic said that students of all ages, as well as their parents, are able to learn new languages.

“But research indicates that the only aspect children outperform adults in is pronunciation. In all other aspects of language learning, adults learn faster and remember longer.”

This article was produced by The Local and presented by Stockholm International School.