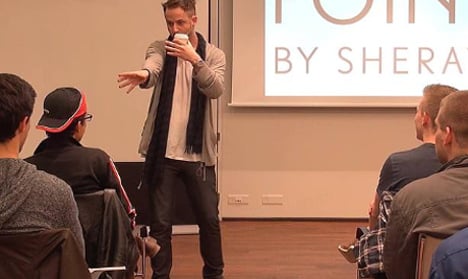 Julian Blanc in an image from his Facebook site. Photo: TT
Blanc, 25, has described himself as "the most hated man in the world" and he has already been banned from touring the UK after his visa application was reportedly turned down.
Earlier this week, Swedish newspaper Metro reported that campaigners had launched an online petition to get Blanc stopped at the border if he tried to arrive in the country for several tour dates he had planned, including one in Gothenburg.
One of the women who signed the petition, Lovisa Tärnholm, 31, told the paper she had done so because Blanc messed with women's emotions "so that they do not understand that they are victims of abuse".
By Tuesday afternoon, the dates in Sweden had been removed from the controversial pick-up artist's website.
Blanc is a Swiss-born American who works for LA-based company Real Social Dynamics and travels the world telling men how to seduce "any woman they want".
But critics say his tactics are sexist and at times violent and dangerous.
Online seminars hosted by the coach include scenes where he grabs the necks of women and pushes their faces towards his crotch.
He also tells a group of men: "In Tokyo, if you're a white male, you can do what you want."
As well as the UK, Australia has stopped him from performing there and he has previously been refused entry to Brazil.
Petitions against trips to Japan and Canada have also been gaining momentum.
The Local was unable to reach Julian Blanc for comment on Tuesday.