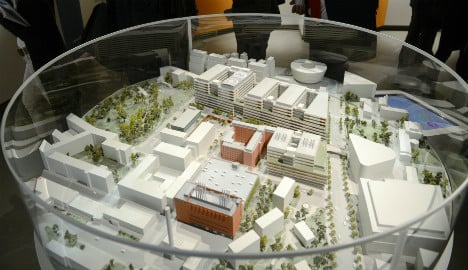 A model of the new Karolinska hospital being constructed in Stockholm. Photo: Bertil Enevåg Ericson/TT
The new flagship Karolinska hospital in Stockholm is aiming to become a world leader in medical training and provision, building on Sweden's reputation for scientific advancements and even hoping to develop future prize winners in Alfred Nobel's home country.
The project is expected to run into billions, with Swedish media reporting it could cost as much as 52 billion kronor.
But reporters for Swedish television network SVT's Mission Investigation (Uppdrag granskning) programme have unearthed documents which they believe connects the companies behind it to a complicated tax structure in Luxembourg.
In the programme, due to be broadcast on Wednesday evening, they suggest that that large amounts of money were transferred to Luxembourg using complex financial structures in order to avoid tax in Sweden.
The development is run by the SHP (Swedish Hospital Partners) organization, comprising of Swedish building giant Skanska and British investment firm Innisfree. SHP secured the contract when it was put out to tender after putting forward the only bid to build, finance and operate the building until 2040.
It has been alleged that as much as 1.3 billion of public money meant for the project has been channelled to Luxembourg. SVT reporters examined leaked papers by auditing firm PricewaterhouseCoopers as part of their research.
The financial commissioner for the Stockholm County Council said he was "disappointed" with the accusations in the programme.
"I think it's sad to hear that they have such aggressive tax planning. Here we will build Sweden's most modern hospital and provide care to the most ill in Stockholm with the best treatment. I think it's unethical not to pay taxes in the country where they operate in," Torbjörn Rosdahl told the SVT programme.
Earlier this month The Local reported that several major Swedish companies including Ikea, Tele2 and SEB have also secured secret tax deals in Luxembourg.
The Swedish firms were among 340 international companies looked at by the International Consortium of Investigative Journalists (ICIJ).
ICIJ said that Luxembourg was still a “magical fairyland” for corporations seeking to "drastically reduce tax bills".
SHP has stated in the past that its tax arrangements comply with Swedish law.
The Local/pr