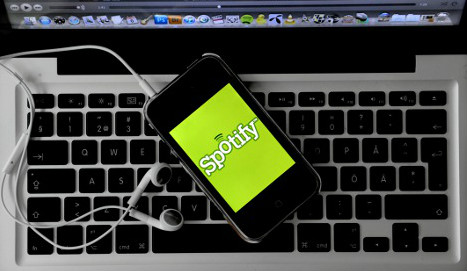 Spotify was created in 2008 in Sweden. Photo: Erik Mårtensson/TT

Revenue reached €746.9 million ($931 million), 91 percent of which came from premium members — paying users — and nine percent from advertising, Spotify Technology said in an annual financial statement published in Luxembourg, where the Swedish company is registered.

The importance of paid-for subscriptions increased from the previous year, when they accounted for 86 percent of the income.

Net losses amounted to €57.8 million in 2013, compared to €86.7 million in 2012, a figure that was revised due to unspecified modifications in the accounting.

Spotify was created in 2008 and is a pioneer in its sector.

US competitor Pandora posted a $600-million revenue for the 11 first months of 2013 and France's Deezer reportedly reached around €100 million in the whole year.

US tech giant Google, which recently launched a paid-for service called "YouTube Music Key", does not provide any figures regarding the revenue from music videos available for free on YouTube and Vevo.

Spotify is steadily expanding throughout the world, with 32 new markets in 2013. Its services are currently available in 58 countries, most of them in Europe and America, and a few in Asia.

In mid-November, Spotify president Martin Lorentzon said that the company expected to increase its staff from 1,500 to 2,000 in the near future. In 2013, it had 958 employees.

The company is not listed, and belongs to its founders and various investors who have financed the project over the years.

Spotify has not announced a profit since its foundation.

The firm has come under fire from a number of global artists, from Radiohead to ACDC, who claim that streaming services pay too little to musicians and damage album sales.

Earlier this month, US star Taylor Swift withdrew her music from the online music service over a payments spat.

Spotify replied in a blog post in which it countered that it paid nearly 70 percent of its revenue back to the music world.