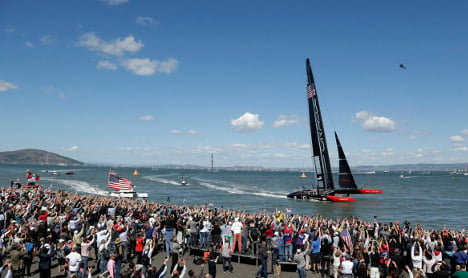 The America's Cup draws crowds wherever it is held. Photo: TT

Gothenburg's inclusion in the AmCup World Series came 24 hours after the English south coast city of Portsmouth announced they would be staging two of the warm up races for yachting's biggest race.

Gothenburg, home to Swedish America's Cup team Artemis Racing, will play host to a warm-up for a competition first staged in 1851 on the weekend of August 28th to 30th.

"It will provide a great opportunity for Artemis Racing to showcase our sport and our America's Cup program."

Fredrik Loof, a three time Olympic medallist and tactician for Artemis Racing, added: "There is an incredible momentum within the group right now, and we hope that the Swedish public will be out in force to cheers us on.

"We're really looking forward to showing them what we can do next August."

For the 35th AmCup, teams will be sailing newly designed AC45 catamarans, described by British sailing great Ben Aislie, who is heading the British team, as "faster and even more exciting than the previous generation".

Racing in Gothenburg will take place either on the Gota River close to the city centre, or at Langedrag, and the race village will be located in Frihamnen.

The last edition of yachting's blue riband in 2013 produced a remarkable comeback from US holders Oracle, who were trailing 8-1 behind New Zealand before prevailing 9-8.