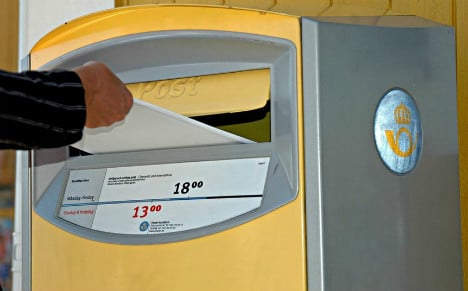 Sweden's Post and Telecom Authority (PTS) compared the cost of sending letters and packages in Sweden, Finland, Denmark, Iceland, Germany and the UK, with the findings published in Dagens Nyheter.

They found that over the last decade the price for sending a package within Sweden in the lowest weight class, up to three kilos, had increased by nearly 35 percent.

In the Nordic region that makes Sweden the most expensive country of them all. For packages to Europe the price has increased by over 42 percent and to the rest of the world by 69 percent.

With Christmas card season now on the horizon consumers will be comforted by the fact that Sweden is one of the cheaper countries to send a letter.

On April 1st the postage for the lowest weight class for letters was raised by seven kronor (9 cents) but at the same time the minimum weight was raised from 20 to 50 grams, which resulted in a reduction in prices for letters between 21 – 50 grams.

"Given the different geographic and demographic conditions in different countries PTS cannot find that the current Swedish prices would be considered unreasonable from an international perspective," PTS said in a statement about the report.