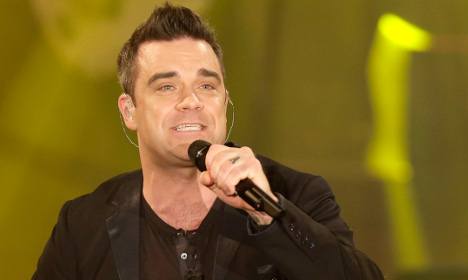 Robbie Williams will headline Sweden's biggest music festival in 2015. Photo: TT
What better time to announce a star-studded line-up for a summer music festival than during one of the darkest Novembers in Sweden's history?
Unfortunately for Bråvalla, music fans aren't quite as excited about the set of artists selected to perform in 2015 as organizers hoped.
Alongside former Take That star Robbie Williams (whose last album was a swing cover tracks compilation),  Muse, Calvin Harris and The Gaslight Anthem are the main international names set to perform between June 25th and 27th 2015.
Previous performers at the event include Swedish superstar DJ Avicii, Kanye West, Lana Del Rey and Kings of Leon.
Social media sites have been swimming with comments from angry Swedish music fans over the past few days, with many saying they had hoped for a less mainstream and more contemporary line-up at the festival, which aims to rival Glastonbury in the UK and Denmark's biggest music event, Roskilde.
One tweeter, @mctalovic wrote in Swedish:
"Bråvalla has booked Calvin Harris and Robbie Williams. They're reaching out to everyone. First festival that you and your parents can go to together!"
IN PICTURES: Sweden's Bråvalla festival

But Niklas Westergren, marketing manager at the organization responsible for the festival, FKP Scorpio, questioned whether a multigenerational crowd was a bad thing for the event.

"If we can draw in parents in addition to teens, then that's great. Bråvalla is a festival for everyone, even if our primary focus is on 20-25 year-olds," he told The Local.

"We're very happy with our choice to get Robbie Williams – he's a giant, an entertainer!".

However criticism about the star continued throughout the week.

"Quantity over quality," tweeted one girl writing under the name @jonielol.
She joked that the festival would next book a band Swedish grandmothers can probably fill you in on – Arvingarna. The group competed in Sweden's Eurovision heats in the 1990s, which probably tells you all you need to know.
Top five winter festivals in Sweden

Calvin Harris is set to perform in Sweden. Photo: TT
Bråvalla launched in 2013 and is already the country's largest festival, attracting a record 50,000 fans in its first year.
Premium camping tickets, which offer access to showers, mobile charge zones and regular toilets have already sold out for 2015, suggesting that plenty of fans are less worried about the line-up.
"Muse in Norrköpping still amazes me!" wrote one fan of the British band on Twitter on Wednesday.

I've said it before, @robbiewilliams isn't my cup of tea, but he's very good at entertaining a crowd. Well done @bravalla

Kent – one of Sweden's most popular alternative bands – said on Friday that Bråvalla will be their only date in the country this year.

"We are obviously super happy that Sweden's biggest rock bands want to come to Bråvalla," Linn Stigsson Stern, press officer for festival told Sweden's Aftonbladet newspaper.
Norwegian group Katzenjammer and Swedish rocker Ola Salo are also on the line-up.
Bråvalla made international headlines last year after lightning struck the festival and because of failed efforts to introduce card-only payments for food and drink at the event.
Robbie Williams will also top the bill at the Tinderbox festival in Denmark, where some fans have also reacted angrily to his scheduled appearance.
READ ALSO: New Danish Festival announces first acts