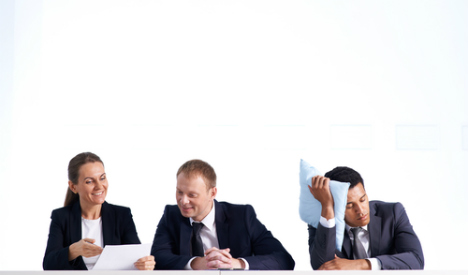 Sleepy man photo: Shutterstock
The party is requesting that all the local politicians should get a free pass to the local gym and indoor swimming pool, according to a report in the Smålands-Tidning daily.
The complimentary pass should be seen as recognition for the work that politicians put in, but also to ensure that politicians do not fall asleep during important meetings, explained Bertil Granman who submitted the motion.
"It's not a big problem and I'm not saying that everyone is doing it, but it happens occasionally that someone nods off in a meeting," Granman said. Granman's motion is co-signed by party colleague Diana Laitinen Carlsson.
Salaries for municipal politicians in Sweden vary widely with for example Stockholm's mayor – which is a full-time position – earning over 100,000 kronor ($13,414) per month while hobby politicians in rural communities are paid only a few thousand kronor per month plus expenses.