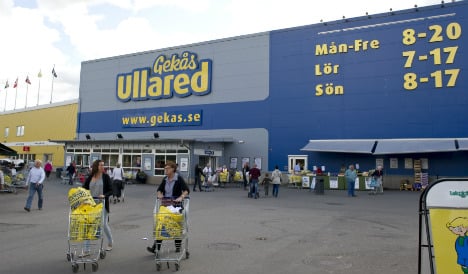 The toy soldiers at the Gekås store in Ullared are manufactured by Cobi and some bear uniforms resembling those worn by the feared Gestapo during the Second World War.

The symbols on the toy soldiers are reported to include swastikas and eagles.

"When I looked closely at the figures I saw that there are German tanks with smiling soldiers from the Nazi era," a father told the Expressen daily.

Gekås CEO Boris Lennerhov has confirmed that the firm plans to shelve the toys.

"This is not something we want to promote as form of ideal," he said.

The incident is far from the first time that offending Nazi-era toys have been discovered on the shelves of Swedish stores.

Mango was obliged to issue an apology in October over a blouse with small lightning symbols after customers spotted the similarity with the symbol used by the Waffen SS. Clothing chain Zara pulled a sheriff jersey in August after complaints that it more closely resembled concentration camp attire than the Wild West.

"One of the most abhorrent and historically ignorant things I have seen," was an example of reactions at the time.

Zara was also at the centre of a 2007 scandal when the company included an bag bearing the swastika in its assortment.