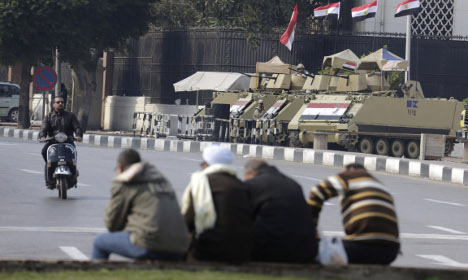 Young people in Kobane Syria. Photo: Amr Nabil/TT
Anders Thornberg, who is head of Sweden's Security Service Säpo, told Swedish television network SVT that the country was one of a number of European nations experiencing the same phenomenon.
"It's an explosive development. When I talk to my colleagues on the other security services in Europe and around the world we see the same trend," he told the Agenda programme on Sunday night.
He suggested that up to 300 Swedes had travelled to countries including Afghanistan, Iraq, Yemen and Syria to fight for Isis, a figure he also quoted in a radio interview last month.
In July, Sweden appointed a national coordinator against violent extremism, former Social Democratic party leader Mona Sahlin.
Her role is to improve cooperation between local authorities, government agencies and other relevant organisations and to help develop initiatives in education.
Speaking to SVT on Sunday, she said that while many young people choose to join Isis (also known as the Islamic State or IS) or other militant groups for political and religious reasons, others – especially girls – are "forced" or "trafficked" to the middle east and southern Asia. Mona Sahlin is Sweden's anti-extremism coordinator. Photo: TT
Sweden appoints coordinator against violent extremism
Sahlin has been speaking to the families of Isis fighters and said that many relatives have suggested that their children do not go abroad voluntarily.
"I hope that cases of trafficking come to light that can be investigated," she told SVT.
Commenting on those who choose to join terror groups, she said that many were following a "dream" to "become something" that turned out to be "a very different reality".
Sahlin used her television appearance to criticize Muslim groups in Sweden for failing to do enough to stop young people travelling abroad and called for a national helpline to help the parents of young fighters.
"These distraught parents, where do they turn today? Very few have someone they know who understands this situation".
'We need to talk about Isis'
Last month, Ibrahim Bouraleh, the chairman of the Järva Islamic Association in Stockholm called for closer cooperation between local government agencies, police and muslim groups. He insisted that Islamic organisations in Sweden are working hard to stop muslims from being radicalized.
"We've been looking into different models that appear to be working in both Denmark and the UK, where social services and police work together to support families affected. They work in advance, educating parents so they can spot the signals before it's too late," he told The Local.
On Sunday, Anders Thornberg also spoke to the need to "pull together all the forces in society" to try and prevent more young people from signing up to Isis.