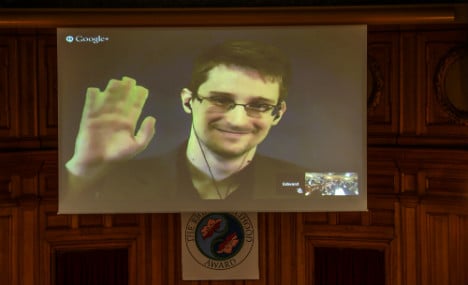 Snowden was unable to attend the ceremony in person so instead gave a speech via a video link from his base in Russia. The Swedish Right Livelihood award has been dubbed an alternative Nobel Prize and Snowden was honoured together with Guardian editor Alan Rusbridger.

He paid tribute to his supporters as well as journalists and campaigners saying that the scale of his revelations had come at a considerable cost for many. Snowden is in exile in Russia and has had his US passport revoked.

"These are things that are unlikely to change soon. But they're worth it…All the prices we paid, all the sacrifices we made, I believe we'd do it again," Snowden said via video-link after receiving a standing ovation.

His father Lon attended the ceremony in Stockholm and told the Guardian that he hopes his son can pick up the award in person soon.

DON'T MISS: Should Snowden get asylum in Sweden?

"“I am thankful for the support of the Right Livelihood award and the Swedish parliament. The award will remain here in expectation that some time – sooner or later – he will come to Stockholm to accept the award," he said.

Jakob von Uexküll, who announced the award said, "Edward Snowden has provided a huge service to the citizens of this planet."

"Mr. Snowden, your Right Livelihood Award is waiting for you! We trust that Sweden will make it possible for you to collect your award here in Stockholm in person!" he added.

Snowden has been holed up in Russia since June 2013, after he leaked top secret NSA documents to journalists. He faces up to three decades in prison.

"Edward Snowden’s actions have led to an intense global debate on appropriate limits of government surveillance and a reaffirmation of the right to privacy in the digital age. In many countries, laws are now being proposed to restrain mass surveillance, and companies look into implementing new technologies and routines to better protect their customers’ data," saud Uexküll on behalf of the Right Livelihood Award's committee.

The Right Livelihood Award honours those who work to improve the lives of others and is traditionally handed out at Stockholm's Ministry of Foreign Affairs.

When Snowden was announced as this year's winner the Swedish foreign ministry said it was banning the civil rights group from making the announcement at their department in the capital.

The award ceremony was moved to the Swedish Parliament and began just hours after a senior Green Party politician suggested that Snowden should be given asylum in Sweden.

Valter Mutt, who is foreign affairs spokesperson for the Greens (who are in coalition with Prime Minister Stefan Löfven's Social Democrats) told Swedish network SVT that Snowden had "exposed an Orwellian surveillance program."

"It’s a disgrace, not only for Sweden but for the whole of the European Union, that Vladimir Putin, a democratically questionable leader is the only one that grants a hero like Snowden asylum," added Mutt.

The Green Party (Miljöpartiet) politician said that Sweden could transfer Snowden to Scandinavia by using the official government plane and compared him to Nelson Mandela and Mahatma Gandhi.

Gustav Fridolin, party leader of the Greens, said that Swedish law prohibits the Government from deciding on asylum cases saying that the process is settled in court. He declined to comment on whether Snowden should be accorded the privilege.

Swedish diplomat Pierre Schori has backed Mutt's proposal saying that there is a historical precedent as Sweden accepted American deserters who fought in the Vietnam war.

"We offered them temporary asylum on humanitarian basis. We could do the same with Snowden," Schori told SVT.

The US has charged Snowden with crimes against national security. Secretary of State John Kerry says the former contractor "damaged his country very significantly."