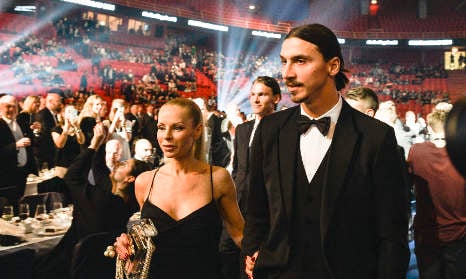 Zlatan at an award ceremony last month. Photo: TT
Sweden's top scoring footballer of all time currently plays for French side Paris Saint-Germain and he is still expected to meet with Sweden's King as well as Her Majesty Queen Silvia of Sweden when they visit the PSG foundation, which finances sporting projects for young people from socially deprived areas of France.
But the star striker is said to have declined the opportunity to dine with the country's leading royal couple as well as President Francois Hollande at the Elysee Palace – the official residence of the President of the French Republic since 1848.
According to French newspaper L'Equipe, Zlatan wants to recharge his batteries ahead of a match against Lille on Wednesday evening.
He will be missing out on several courses of French food and fine wine during the state banquet, which gets underway at 8pm.
Paris Saint-Germain are currently second in the French league, just one point behind Marseille. On Saturday they will meet Nantes and are set to take on FC Barcelona on the following Wednesday.
Zlatan's career in pictures
Sweden's King and Queen will be in France from December 2nd – 4th as part of an official state visit.
They will also be meeting French business leaders and economists, attending a conference on climate and energy issue and travelling to the city of Toulouse, France's hub for aerospace research.