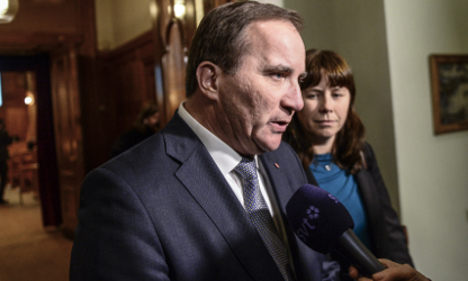 Prime Minister Stefan Löfven and Green Party leader Åsa Romsen on Tuesday. Photo: TT
Following the Sweden Democrats' announcement, Löfven called the four party centre-right Alliance to talks on Tuesday evening. The Liberal Party's (Folkpartiet) press office later confirmed that all four parties would attend. Notably, the Left Party, which is currently supporting the government's budget, is not invited to the talks.
The announcement of the Sweden Democrats' move was made by the the party-owned newspaper Samtiden on Tuesday afternoon as journalists awaited an announcement at Sweden's Riksdag.
The move is bad news for the country's Social Democrat Prime Minister who has said he will quit if support from the Sweden Democrats means that the opposition budget proposal ends up getting more support than his own coalition government's financial plan.
Such a scenario could lead to a snap election just months after Sweden last went to the polls.
The Social Democrats are currently in coalition with the Green Party, following an election in September that toppled Moderate Party leader Fredrik Reinfeldt's centre-right coalition after eight years in power.

Anna Kinberg Batra, effectively acting leader of the Moderates after Reinfeldt left the scene, appeared to pour cold water on the idea that her party would let the government’s budget pass.

“It’s not the opposition’s responsibility to pass the government’s budget,” she said shortly after the Sweden Democrats’ press conference.

“It’s up to Prime Minister Stefan Löfven to find a solution now,” she said, adding that the Alliance parties would vote for their own budget.

Is Sweden heading for a new election?

Sweden Democrat-owned paper #Samtiden says the party will vote for the Alliance budget, which could fell Swedish government. #svpol

It is tradition in Swedish politics that the main opposition party or parties put forward a shadow budget to rival the government's own proposition.
On Wednesday one rival budget is being submitted by the four centre-right parties – the Alliance – that made up the previous coalition government in Sweden. The nationalist anti-immigration Sweden Democrats will submit another.
It is expected that the Sweden Democrats' budget will be rejected immediately but by voting for the Alliance's centre-right budget proposal in a second round of voting, the Alliance's package is likely to get more support than the government's budget.
Speaking in Sweden's parliament on Tuesday, the acting leader for the Sweden Democrats Mattias Karlson said his party had been discriminated against by the political system and used his speech to push for immigration cuts in Sweden – a move that no other political party currently supports. He said that if the Alliance took power and submitted a budget that did not cut immigration, it would also vote against that budget.
"We have to do this to get influence," added the nationalist party's finance spokesperson Oscar Sjöstedt.
The anti-immigrant Sweden Democrats became third largest party in Sweden in September, scoring almost thirteen percent of the vote in a country famous for its egalitarian ideals.
The Social Democrats had no immediate formal response to the Sweden Democrats' decision. While Social Democrat supporters took to twitter to express concern about the budget crisis, Sweden's former Foreign Minister, Carl Bildt said that it would be "better for the country" if the government's budget was rejected.

Looks likely that Parliament tomorrow will approve the budget proposal of the opposition Alliance parties. Better for the country. Acting Sweden Democrat leader Mattias Karlson. Photo: TT
In a hastily-arranged press conference on Tuesday, Prime Minister Stefan Löfven said the Alliance parties "bear a heavy responsibility."
"Are they prepared to cooperate with the government over the budget. Or are they prepared to govern with the support of the Sweden Democrats," he said.
The Sweden Democrat party's press secretary Martin Kinnunen told Swedish newspaper Dagens Nyheter on Tuesday afternoon that nationalists had made their minds up about which way to vote a week ago, with absentee party leader Jimmie Åkesson having the final say.
Åkesson is currently on extended sick leave and is not expected to return to the Swedish parliament until early next year.
The budget vote will take place on Wednesday morning.