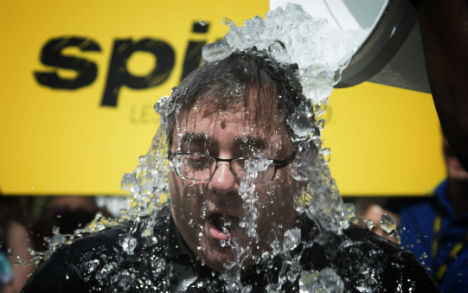 The money was awarded by the Swedish Neuro foundation (Neurofonden) for a European collaborative project that will go towards research aimed at helping ALS (amyotrophic lateral sclerosis) patients as well as sufferers of dementia and Parkinson's disease.

"All those who took part in the Ice Bucket challenge feel that it was worth the effort. As a result the Neuro Federation and the Neuro Foundation are the first in Sweden to divide up a million kronor to be spent on cutting edge ALS research," Lise Lidbäck, chairperson of the foundation said in a statement.

Throughout July and August the ice bucket challenge went viral on social media with a whole host of famous faces throwing a bucket of water over their head to raise money for ALS research.

Among those who participated were former US President George Bush and retired footballer David Beckham.

"In addition to the money it has also meant that ALS has got a face and that knowledge of the condition has spread," added Lidbäck.

The success of the challenge has inspired many copycat creations with organizations lining up to replicate it.

"I get so many requests, 'how do we make an ice bucket challenge?' But you can't do it again because it was unique," said digital pr strategist Deeped Niclas Strandh to the TT news agency.

He added that it was unlikely any similar campaign would be as large in the future.

It's estimated that the challenge has raised in excess of $100 million since it went global throughout the summer.