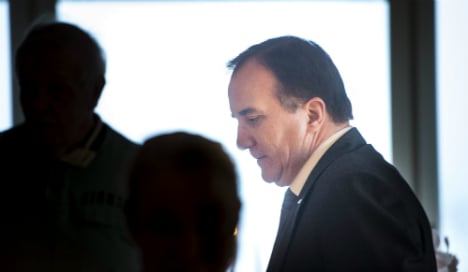 Swedish Prime Minister Stefan Löfven. Pontus Lundahl/TT
"I'm not going to manage somebody else's budget. It would be simply stupid," Löfven told Dagens Nyheter ahead of the crucial vote.
Löfven's new government will present their first budget proposal on Wednesday. The previous Alliance coalition will submit a rival budget as will the Sweden Democrats.
It's expected that the Sweden Democrats' budget will be rejected immediately but the nationalist party could make things difficult for Löfven by voting for the Alliance's centre-right budget proposal, giving it more votes than the government budget.
Such a scenario could lead to a snap election just months after Sweden went to the polls in September. Löfven told Dagens Nyheter that a fresh election was a possibility over the budget issue.
Is Sweden heading for a new election?
"It's not the first choice but you can't rule it out. We just had an election so that's why I mean we all must think. The voters have given us a result and as we see the playing field I think the electorate expect us to handle the situation," said Löfven.
The Social Democrat-Green pact can also choose to resign and allow the speaker of the parliament to start a new round to elect another government.
However, it is more likely that Löfven will push for negotiations with the Alliance parties and potentially have a broader coalition going forward.
"They (Alliance) were very clear during the election campaign that they didn't want any organized cooperation with the Sweden Democrats. And that is why we must think beyond block boundaries," said the Prime Minister.
Meanwhile the nationalist Sweden Democrats party has stated they have already made their decision on how they will act during the budget vote.
Press secretary Martin Kinnunen told Dagens Nyheter on Tuesday afternoon that they made their minds up a week ago, with absentee party leader Jimmie Åkesson having the final say. Åkesson is currently on extended sick leave and is not expected to return to the Swedish parliament until early next year.
Sweden's parliament will vote on the new budget on Wednesday.
TT/The Local/pr