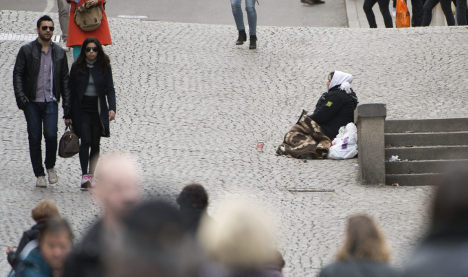 Roma beggars are a growing presence across Sweden. Photo: TT
The video, which was filmed by local newspaper Helsingborgs Dagblad, caught a man taking money from a beggar's cup after it was left unwatched for a matter of minutes.
The scandal follows a number of attacks on beggars from the Roma community, who are a growing presence in all of Sweden's major urban centres.
In Helsingsborg alone, they have been spat on, had their cups pushed over and even been shoved by passers by, according to social services in the city.
Sinisa Ismailovic, who has a Roma background and has been working on social projects in Helsingsborg, told the newspaper that he was "not surprised" by the latest revelations.
"There is a great desire to help in Swedish society. But then there are the few who have a completely different approach," he told Helsingborgs Dagblad.
Ismailovic told the newspaper that he was aware that giving money to beggars should not be a long term solution but argued that it was right for Swedes to try and help Roma people moving to Sweden from much poorer communities, until the situation in Romania improved.
"Right now they're here… I think we must help them here," he said.
Other members of the Roma community told the local newspaper that they had not been ill-treated on the streets.
Niculai Marioara, 50, said: "The Swedes are very good people. Many also give money, but I understand that not everyone has that opportunity".
George Lâutaru Alexandru, 24, who also moved from Romania to Helsingborg added: "Everyone is kind and friendly and I am grateful to those who give money".
But Sinisa Ismailovic argued that many beggars were too afraid to speak their minds.
"Even if the migrants themselves say that they are well treated, at the same time they are telling us…that they live with the constant fear that their encampments will be vandalized. They do not want people to know where the camps are located. They dare not light fires at night. They are afraid that someone will see the smoke," he said.
There are growing concerns about organized begging in Swedish cities, with 'ringmasters' taking a cut of beggars' earnings or charging them 'rent' to sit in certain locations.
Ismailovic said he was aware of the situation.
Speaking to The Local on Wednesday, project manager for the city of Helsingborg said that the municipality was working hard to help Roma beggars.

“The city of Helsingborg is continuously in contact with the EU migrants who are in Helsingborg. As an example, we have been in their camps to ensure that there are no children there. In addition, we cooperate with a number of voluntary organizations such as the Red Cross and the Swedish Church. We have also offered them clothes and showers and financial help to return home".

He added: "When some of them are sometimes unpleasantly treated, it is regrettable, but it is difficult for the city to do something about  that".

He stressed that he was not aware of any "criminal" attacks against EU migrants in Helsingborg.