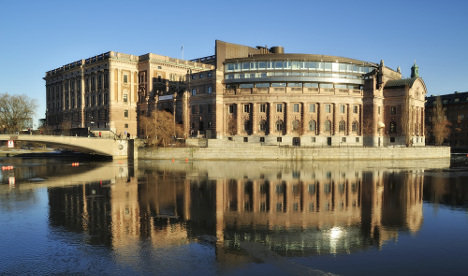 Sweden's parliament. Photo: TT
Transparency International’s Corruption Perception Index (CPI) measures the perception of corruption in 175 countries and this year found that corruption appears to be worsening in China, Turkey and other fast-growing economies.
Sweden was among the top five nations held up as an example to others by the campaign group, although its Nordic neighbour Denmark topped the list and Finland came third.
Sweden scored 87 out of a possible 100 points in the study, compared with 89 last year. The average score for all countries was 43, and two thirds of the ranked countries were below 50.
Transparency International urged other countries to learn from Denmark's example:
“While top performer Denmark has strong rule of law, support for civil society and clear rules governing the behaviour of those in public positions, it also set an example this November, announcing plans to create a public register including beneficial ownership information for all companies incorporated in Denmark,” the group wrote in a press release.
Read more on The Local Denmark
The Berlin-based group's table is the most widely used gauge of corruption by governments, police, court systems, political parties and bureaucracies, a scourge it says undermines development and deepens poverty.
But this year Transparency International highlighted the role multinational banks and the world's financial centres play in allowing the dodgy elites of some developing countries to stash away or launder their ill-gotten millions.
The organization says that because corruption is illegal and secretive, it cannot be empirically measured. So instead it collates surveys from the World Bank, African Development Bank, Economist Intelligence Unit and other bodies.