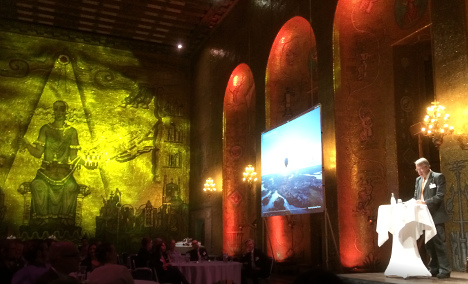 "We want more companies to come to Stockholm to continue to strengthen our strong brand.”

The comments came during the 2014 Stockholm International Business Meeting, an annual gathering of more than 100 foreign business leaders and public officials from Stockholm and neighbouring municipalities.

Held in the stately Golden Hall, scene of the famed Nobel Banquet ball, the event serves as a forum for Stockholm’s international business and diplomatic community to exchange ideas face-to-face with city officials.

Valeskog remained bullish about Stockholm's future, adding that foreign companies both contributed to the city’s growth, and were well-positioned to benefit.

"Such strong economic development requires enormous investment in infrastructure and housing. We'll be making major efforts to ensure this is realized,” he added.

Valeskog’s comments were followed by remarks from Norwegian entrepreneur Knut Faremo, who told of his experience introducing Picard, France's largest chain of frozen quality food, to the Stockholm market.

He credited Stockholmers’ “openness to new things” as one of the keys to Picard’s success.

"Swedes also understand that frozen food can be quality food,” he told the audience of more than 100 attendees.

"Picard has been a great success from the start. Swedes are very international – they are happy to have French text on all the products! They like that."

Faremo, who also helped build the successful chain of Apoteket Hjärtat pharmacies before then selling the business to the ICA grocery chain, admitted that it’s not always easy for a Norwegian to do business in Sweden.

“We're not as stylish, and not as international as the Swedes,” he joked, before remarking on the importance of taking differences in consumer habits into account.

"In France, Picard produces a 100 page catalogue that’s delivered to people's homes. But we persuaded the French guys that there was no need for that in Sweden – everything is done online, on our web site and social media,” Faremo explained.

He was also quick to praise Stockholm as a city filled with people that are “very professional and very honest”, making the city a welcoming place for foreign businesses.

"In Sweden things sometimes move faster than some companies can cope with,” he said.

This article was produced by The Local and sponsored by Stockholm Business Region.