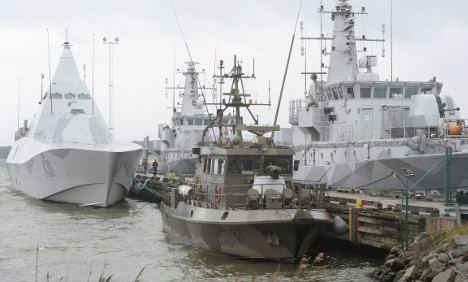 Swedish military ships during the search. Photo: TT
Volunteer soldiers from Sweden's Home Guard speaking to Swedish newspaper Dagens Nyheter say they were given a fee of between four and 24 kronor an hour (50 cents to $3.20) during the days they spent searching for the submarine.
Many were on duty for eighteen-hour stretches during the hunt, which did not succeed in tracking down the vessel before it left Swedish waters. The Swedish military later said it had sourced enough "conclusive evidence" to be sure that a foreign object had been in the region although it could not determine where the mini submarine came from.
Swedish warships, minesweepers, helicopters and more than 200 troops were involved in the search, including volunteer soldiers who gave up previously booked holiday from their main employers.
One unnamed volunteer soldier wrote on Facebook: "Was it worth losing 13,878 kronor in salary to make my contribution for 19 kronor per hour? The answer can be calculated even by a fool…Me and my friends who took time off from our civilian jobs to help to the best of our abilities got a slap in the face".
Another source told Dagens Nyheter: "We got calls the same day that information on the suspected underwater operation became public in the media…We're not doing this for money, but because we want to participate and contribute. But this renumeration came as a shock to us," he added.
Proof of submarine in foreign waters
Jesper Tengroth, Press Secretary for Sweden's Armed Forces told The Local that the Swedish military had already started "looking into the problem" ahead of the revelations in Dagens Nyheter.
He said that there was an "allowance issue" that affected a "small and specific" group of Home Guard volunteer soldiers who were already taking part in a military exercise at the time the submarine hunt got underway. For this kind of voluntary work he said it was "normal" for Swedes to be paid a rate equivalent to the hourly sick pay they usually got from their day jobs (usually around 60 to 80 percent of their regular wage) and noted that the fees quoted in Dagens Nyheter were therefore "accurate under those circumstances".
But he added that there had been "some kind of miscommunication" when the soldiers were switched on to the large-scale national military operation alongside full time staff on much higher wages.
"When they moved from an 'exercise' to a real 'operation' it seems the commanders who made this decision didn't think about changing the salary," he said.
"We are looking into what happened and we will see where we end up," he added.