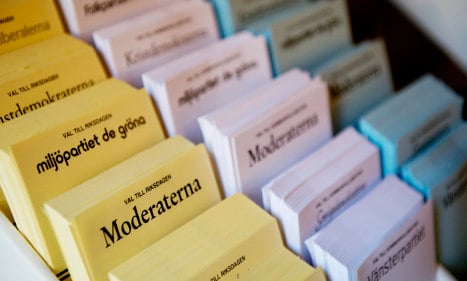 Ten million ballot papers are on standby in Sweden. Photo: TT
Less than three months since Sweden last went to the polls, its political parties have another election looming over them during Sweden's long, dark winter.
The key questions being asked by political commentators on Thursday included when campaigning was set to start, how much it was going to cost, and whether parties intended to change any of their policies ahead of the election.
The Social Democrat party, which leads the current coalition government, said it did not want to spend the next three months campaigning.
"You can't start now. We don't want to. No one wants to. The voters certainly don't want us to. You can't drive an election campaign for four months. It's too long," commented the group's party secretary Carin Jämtin.
She said that her party would encourage others to begin competing in earnest in February.
"It's winter. It is more difficult to campaign when there is snow," she told news agency TT.
But she added that there had already been an "unbelievable drive in the party's organisation".
"I know several places around the country where there are people carrying out party activities at the weekend. In some places, people were out and knocking on doors last night," she said.

Sweden's Social Democrat Prime Minister Stefan Löfven (right) with Green Party co-spokesperson Gustav Fridolin. Photo: TT
Ten million ballot papers are on standby for the vote in March, with all parties expected to prepare new posters and adverts for the contest.
Centre Party Secretary Michael Arthur said on Thursday that his party would be able to finance the election campaign, although he said it would be "less extensive" compared to the previous contest. The Centre Party is among Europe's richest parties after it sold its newspaper empire in 2005 for 1.8 billion kronor.
The group is among the four centre-right parties that made up the Alliance government that was in power until September 2014. The parties will each present their own manifestos ahead of the next election as well as a list of shared pledges should they secure enough votes to form a new coalition government. The bloc has previously focused on improving school test results and boosting business in Sweden, while cutting taxes.
IN PICTURES: Sweden's political crisis
Prime Minister Stefan Löfven has said that his Social Democrat party intends to campaign on a joint ticket with its current junior coalition partner the Green Party and plans to stick to his failed budget plan as the basis for future election promises. The two parties want to raise taxes, increase welfare spending and boost employment by investing in new housing in Sweden.
The nationalist Sweden Democrats who are currently the third largest party in Sweden used media interviews on Thursday to push for an election that was "a referendum on immigration". But the country's other main political blocs shied away from the idea.
A source within former Prime Minister Fredrik Reinfeldt's centre-right Moderate Party told The Local that immigration was "not a key election issue". Thousands of refugees from Syria are arriving in Sweden. Photo: TT
The Left party, which has close links to the Social Democrats and the Green Party but is not part of the current coalition, released a statement saying "an extreme right wing Party must not dictate the agenda of Swedish politics, it must be isolated".
Speaking to The Local, its spokesperson on migration Hanna Löfqvist said it was important for Sweden to continue to welcome immigrants.
"The right to seek asylum is a basic human right. There are more than 50 million refugees in the world as we speak and Sweden has signed international conventions – which we have an obligation to fulfil as a civilized country. We – as a progressive political party – have to stand up for the Human Rights. It’s more important than ever. Nobody should be sent back to war and persecution," she said.
Sweden, with a population just shy of 10 million, is expecting nearly 100,000 asylum seekers this year, many of them Syrians who automatically receive residency on arrival.
A survey of 1,500 Swedes by polling service Novus in September showed 34 percent in favour of receiving fewer refugees, while 28 percent wanted more and 32 percent considered the current level appropriate.
How the Sweden Democrats went mainstream
But while immigration is not yet a mainstream political debate in the country, some political scientists have speculated that the growing strength of the Sweden Democrats could change things in the coming months.
Ulf Bjereld, a political scientist at University of Gothenburg told the AFP news agency:
"Sweden has been without this type of radical right-wing party for longer than large parts of Europe, so you could say that Sweden has become more normal after getting this party".
But he added that the development did not bode well in a country known for tolerance and stability.
Both left and right blocs in parliament have publicly declared their refusal to work with the Sweden Democrats in any manner, setting up the country's politics for potentially long-term lingering paralysis if the party maintains its current strength.