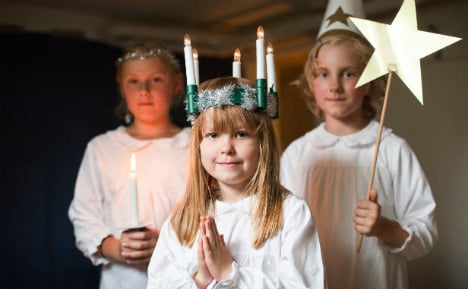 Staff at the Ödeshög primary school broke with tradition when selecting this year's Lucia (or Saint Lucy as she is known in English).

Instead of the usual voting process they put the names of all the interested parties into a hat and selected the winning candidate in a lottery.

Among the names were three boys and when the new Lucia was announced it turned out to be one of the trio. The school said the random selection was done in the interests of democracy and equality.

But traditionalists weren't too impressed. Usually Lucia is portrayed by a girl, who sports candles on her head to represent Saint Lucia.

The reaction in the classroom was rather different with most of the boy's classmates supporting the gesture, although not all their parents agreed with the plan.

"Some people think it was a ploy to choose a boy to play Lucia. But we followed the teaching plan. We're supposed to teach equality and democracy," added Wissman.

Some protestors contacted the school's headmaster to explain their anger.

As well as being unhappy that a boy was representing the saint, many were hacked off that ceremony was being moved from a church to the school gymnasium instead.

The school is standing by its decision and has invited the town's official Lucia, who is female, to the school to take part in the ceremony.

In a compromise gesture, the boy will lead the procession for the pupils' parents in the morning while the official Lucia will take over in the afternoon.

Last month The Local reported that interest in Lucia in Sweden is on the wane. Several municipalities across the country have had to scrap their annual celebrations as they are struggling to find candidates, with experts saying the tradition is increasingly becoming a thing of the past.

In Sweden Lucia has long been a part of Christmas festivities. In many schools and workplaces, a nominated girl or young woman will don a white dress and wear a wreath of candles on her head.