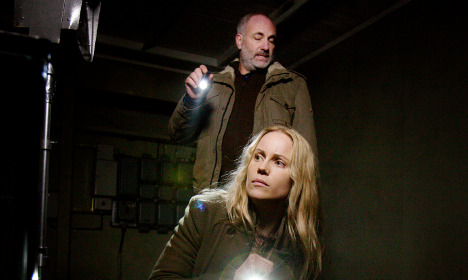 Actors Sofia Helin and Kim Bodnia on the set of The Bridge. Photo: Ola Torkelsson/TT

We know how much many of you love winter markets and this weekend Gamla Linköping, or Old Linköping (around two hours south of Stockholm) is among the locations were you can embrace the festive cheer. The town's historical buildings will be decked out with decorations. You can dance around the Christmas tree and meet Santa (or Tomten as he's known in Swedish). The Local will also be on location, snapping some photos of the event. Look out for them on our Twitter and Facebook pages.

If Scandinavian crime drama is more to your taste, the last bus tour of the year showcasing locations from hit Swedish-Danish production The Bridge is taking place in Sweden’s Malmö on December 6th. Fans will get the chance to follow in the footsteps of characters Martin Rodhe and Saga Norén on the hunt for an elusive killer.

In Umeå in northern Sweden, one of the region's biggest orchestras is putting on its end of year event. On December 11th, NorrlandsOperan will host Musical Magic – its last concert before February. Works from composers including Coates, Ravel, Tjajkovskij, and Stravinskij will be performed alongside musical arrangements of Cinderella and Sleeping Beauty.

Plus there nothing like a festival where you can have a wiggle to keep you warm during winter. Dovas Winterburst 2014 is coming to Stockholm on December 5th, featuring rap and electro artists such as Far&Son, Mr Cool, and JOY. As if that is not enough to keep you toasty, the festival also includes some stand-up comedy.

For more ideas of things to see and do in Sweden, click through our full guide below.