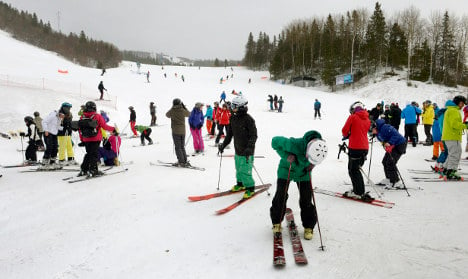 Skiers in Sweden's Åre where there is plenty of snow this year. Photo: TT

The International Ski Federation (FIS) announced on Friday that the women's giant slalom and slalom races scheduled to take place in the French resort on December 13th and 14th had been cancelled, after the men's races at Val d'Isère were also called off.

It later confirmed to The Local that Åre in Sweden would now host the races instead.

Åre is one of Sweden's largest ski resorts and is located in Jämtland near the border with Norway. It is home to around 1,500 people and derives some 25 percent of its income from tourism.

The resort, which is operated by stock market listed company Skistar, has previously hosted the Alpine World Championships in 1954 and 2007 and was preparing to host the contest in 2019.

"It is fabulous for us to have both the men and the ladies coming here," Karin Stolt Halvarsson, CEO for World Cup Åre told The Local.
"We can show off our slopes and the fact that unlike France we have lots of snow!".
She said that some ski teams were planning to arrive on Monday to train in the region.
"It is a really busy time for us now  – we are expecting a thousand people and we need to sort out accommodation and food and all the other logistics".
But she said that numerous "experienced volunteers" in the area would ensure that things ran smoothly.
Many of the races will take place on floodlit courses, as Åre only has a few hours of daylight at this time of year.

France is experiencing an unusually warm winter, which has caused several ski resorts – from the Alps to the Pyrenees and Jura – to delay their seasonal openings by at least a week.

Despite the Alps getting some snow in early November, the snow has since melted away, leaving the slopes bare.

France is set to record its hottest year since 1900.