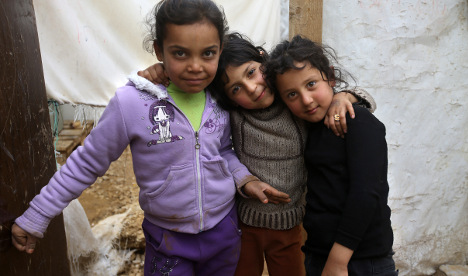 Thousands of refugees are fleeing Syria for Sweden. Photo: TT
Writing in the Swedish newspaper Dagens Nyheter, four politicians from Sweden's conservative Christian Democrat and Centre parties said that while the Sweden Democrats were wrong to call for immigration to be cut by up to 90 percent in Sweden, the country's immigration and integration strategies deserved a more openly critical discussion.
Currently none of Sweden's centre-right or centre-left parties are against the country's liberal immigration laws, which have resulted in the country taking in more refugees per capita than any other nation in the EU.
All of the mainstream parties have so far refused to enter into immigration discussions with the Sweden Democrats – a group with Nazi roots that has sought to establish itself as a populist party and scored almost 13 percent of the vote in September's general election. It is now the third largest political group in parliament.
IN PICTURES: Sweden's political crisis
"To categorically ignore the Sweden Democrats' presence in parliament is to give them a populist free ticket instead of fighting their xenophobia," the former politicians wrote in Swedish newspaper Dagens Nyheter on Friday. "We believe that the parties should be able to converse with the Sweden Democrats."
The ex-parliamentarians argued that the nation's other political parties needed to start a discussion on "a responsible policy on refugees".
"Despite migration and integration policy shortcomings, there is quiet from all parties except from the Sweden Democrats," they said.
The critical group consists of Rasmus Rasmusson who chairs the Christian Democratic International Centre, Staffan Danielsson a former Centre Party MP and social commentator, Annelie Enochson a former Christan Democrat MP and lawyer Rolf Åbjörnsson who is also a ex-politician for the Christian Democrats. Photo: Staffan Danielsson is former Centre Party MP who co-wrote the article
The former politicians are calling for refugee quotas and a crackdown on those seeking asylum on false grounds or without the right paperwork.
"The other parties stress our humanitarian duty and our desire to do the maximum, without considering the obvious problems," they wrote.
Nordic neighbours Norway and Denmark have already seen anti-immigrant parties become more vocal in recent years, a move which has influenced national immigration policy. Germany, France and the UK are also seeing a resurgence in nationalist sentiment.
But speaking to Sveriges Radio, political scientist Andreas Johansson Heinö said he believed Sweden was unlikely to go down that route.
"The Sweden Democrats have a different story to parties like [Norway's] Progress Party and the Danish People's Party".
How the Sweden Democrats went mainstream
Amid a heated social media discussion, the Centre Party sought to distance itself from the debate article, saying it represented the "opinion of its authors".
Later on Friday, Sweden's Social Democrat Finance Minister Magdalena Andersson became the latest government minister to slam the Sweden Democrats for blocking the government budget, a move that led to the current political crisis and triggered the snap election.
She said the "neo-fascist party" wanted to "dictate the terms in Swedish politics".
"It's a party that doesn't stand for the basic value that all human beings are equal, which now raises its voice and wants to dictate the terms in Swedish politics," Andersson told news agency TT.