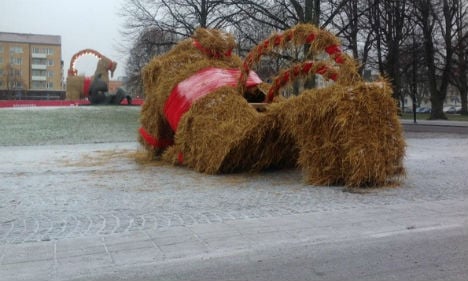 The aftermath of the attack on Gävle's Christmas baby goat. Photo: Gävlebocken/Twitter

Every year the main goat attracts huge attention around Sweden, and even internationally, as it battles to avoid budding arsonists.

On Friday it emerged that vandals had overturned the smaller straw goat, dubbed its little brother, in the middle of the night. The baby goat had only been erected a few days previously by pupils from a local school but was spotted with its face buried in the ground after the attack.

A witness told police that three people carried out the act of vandalism before fleeing the scene.

The incident comes just days after the city's signature 13 foot goat went up to much fanfare at a ceremony attended by 15,000 people.

More often than not the goat goes up flames before Christmas Eve. Organizers have gone to great lengths this year to protect the straw crowd puller by shifting the local taxi rank to surround it.

"For this year we've come up with what we think is a genius move to protect the goat. At least it will be a genius idea if the goat is still standing on December 29th," Johan Adolfsson, head of communications with Gävle municipality and spokesperson for the goat told The Local.

He added: "We have shifted the taxi station to the centre of town so the good people of Gävle can keep an eye on the goat and got extra security as well as a few other measures. The goat has become a symbol of the area and it would be great if it makes it through at least one Christmas every other year."

In addition to moving the taxi rank, organizers have beefed up security by hiring a private security firm to monitor the goat. They have also installed a webcam so people can log on and see if the goat makes it through each day. Last year's attempt lasted until December 21st when it was burned to a crisp. In the past the goat survived an attempted kidnapping by helicopter while an American tourist was convicted of arson for setting fire to it, in the mistaken belief that it was part of the Christmas tradition in Gävle.

International interest in the goat has hit an all-time high for 2014 with news crews from America and Germany travelling to Sweden to cover its unveiling.

At the time of writing the goat remains standing and has over 6,000 followers on Twitter.