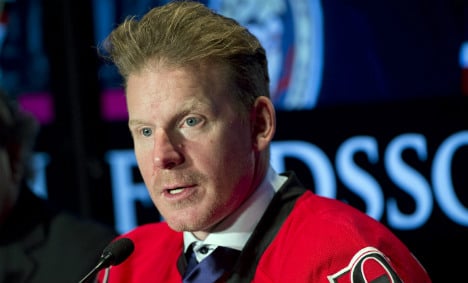 Gothenburg native Alfredsson, who spent the 2013-14 season with the Detroit Red Wings, confirmed that back trouble was forcing him to forego another season.

"Last year my body began to complain once more," Alfredsson said. "The old injuries and hard work to recover began again. I worked hard to play another year, (but) three weeks ago I decided to retire."

Alfredsson signed a one-day contract with the Senators and was set to skate with the team in Thursday night in warmups before the scheduled game against the New York Islanders.

Alfredsson joined the Senators for the 1995-96 season and became the face of the club.

He was named the club's captain in October 1999 and served in that role until he departed for Detroit as a free agent in July 2013.

Alfredsson was the Calder Trophy winner as the league's top rookie in 1996 and helped the Senators to 14 playoff appearances during his tenure, including a trip to the Stanley Cup Finals in 2007, when they lost to Anaheim.