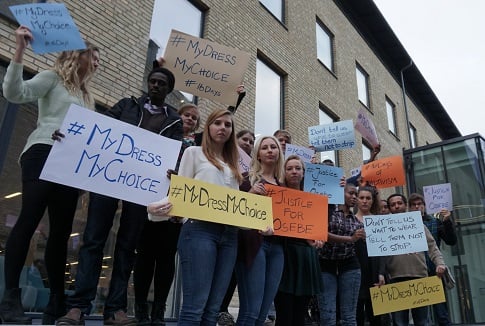 In recent weeks there has been a lot of media attention in my country Kenya where women have been stripped naked and assaulted for wearing miniskirts or other clothing perceived to be immodest.

I decided to get involved, and during the International Day for the Elimination of Violence Against Women, together with my classmates, we were able to organize a solidarity event here at Lund University in support of the women in Kenya.

Since moving to Sweden I have observed what a gender-balanced society is like, noted the fairness, equality and respect that exists for women here, and this has made me realize that it is possible to have the same type of society in Kenya.

Through the use of social media, such as Twitter in particular, we were able to share our messages of support, which have since gone viral and reached so many people. Our event was just one of the many events to be organized, as several social activists have also been involved in similar events in different parts of the world.

My classmates here in Lund were really helpful in organizing this event, and they were all enthusiastic to join in and support even though it was a problem that existed far from us. Just explaining this problem to them was almost unbelievable to most of them, but as the majority of us are Development Studies majors it was an important cause as we are all interested in contributing to social change.

After seeing how much attention our support received, and also the appreciation on social media by women especially in Kenya, I felt like we can always do something no matter how far fetched the problem seems. Even though I was not directly affected, I still felt that I could do something to try to change my society, particularly with my experience here in Sweden.

I would like to advise other SI scholarship students to try as much as possible to be actively engaged with what is going on in their respective countries, and be as involved as possible. Today with social media, I believe leadership has become easier, and you can make an impact from anywhere you are.

There is so much that we can do which will be helpful in the future, and as the Swedish Institute is always encouraging us to become change-makers, it's good to start being involved in leadership. I believe no matter how subtle our voices are they contribute towards something.

Condensed tweets of the larger conversations in which we helped contribute to are found here.