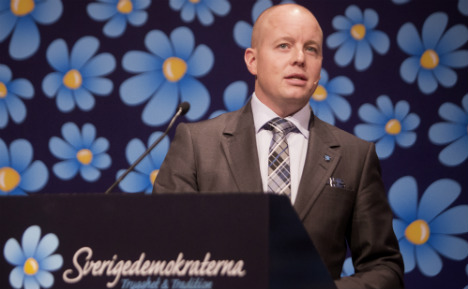 In an editorial penned for leading Swedish daily Dagens Nyheter Löfven wrote "I will never act in a way that would give power over the country's development to a neo-fascist single issue political party that neither respects human diversity or Sweden's democratic institutions."

His remarks sparked a strong response from the Sweden Democrats' party secretary Björn Söder who claimed Löfven was talking "nonsense." Indeed the party believes that Löfven's attack may backfire at the polls and encourage more of the electorate to vote for them.

"I don't think such epithets belong in a serious debate. I think it's a bit rich to use such epithets," Söder told SVT at a weekend conference the party is hosting in Västerås, central Sweden.

Söder added to the TT news agency; "People are used to us being the target of such strange accusations. Of course we stand up for equal rights for everybody so it is complete nonsense."

Acting leader of the party Mattias Karlsson demanded that Andersson apologize to the Sweden Democrats' voters saying that her comments were "ignorant, rude and undignified."

The saga has threatened to overshadow the party's meeting in Västerås, which is being attended by 850 people. It's believed to be the largest meeting the Sweden Democrats have ever held.

Party leader Jimmie Åkesson is absent from proceedings as he is still on sick leave citing exhaustion. Colleagues held up signs saying 'Go Jimmie' and Söder paid tribute to him in his speech.

"Jimmie will come back, stronger and more psyched up than ever," Söder told TT.

In last September's election the Sweden Democrats established themselves as the third largest party in the country. A new opinion poll conducted by Yougov stated that the party has increased its support to over 17 percent, in comparison to the 12.9 percent it earned in the recent election.

Sweden will hold a snap election next March after the current government failed to get its budget approved in parliament. The Sweden Democrats said they voted against the budget in protest against rising immigration.

It's expected the election will take place on March 22nd. A poll conducted in the wake of the announcement stated that two thirds of Swedes backed plans for a fresh election.