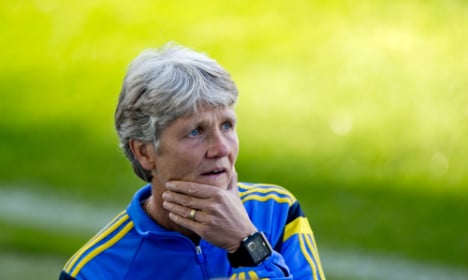 The draw adds a little intrigue as Sundhage guided the Americans to back-to-back Olympic titles before taking the helm in her native country in September 2012.

The former Sweden international thought it “weird” that sixth-ranked Brazil, rather than fifth-ranked Sweden, were seeded but added, “I’m not the person who can do anything about it. You just accept it and go with it.”

Sweden enjoy fifth place in the FIFA rankings but were left unseeded for purely geographic reasons.

American coach Jill Ellis meanwhile insisted the games would be good preparation for the latter stages of the tournament in their quest for a third World Cup title, and first since 1999. Germany are the only other two-time winners of the event first played in 1991.

“It’s a good group to get us ready to play,” Ellis said.

“It’s probably the toughest group, but we’ve got a lot of depth on our roster. That’s historically been the path the USA has taken, and we’re obviously going to embrace it. You’ve got to play good teams to win it. We’ll be ready.”Australia coach Alen Stajcic promised his ‘Matildas’ would fear nobody.

“We can’t wait to play the number one team in the world in the first game,” he said of his side’s crunch game against the United States in Winnipeg on June 8th.

“You expect to play the best teams at a World Cup and we certainly got that in our group. It’s no holds barred playing possibly the toughest teams in each pot.”

The seventh edition of Women’s World Cup will feature 24 teams for the first time — up from 16 with the top two finishers from each group automatically advancing to the last 16.

Hosts Canada will open the tournament in Edmonton on June 6 against China, with New Zealand and the Netherlands rounding out Group A. The final takes place in Vancouver on July 5th.

Holders Japan set their sights firmly on retaining their Women’s World Cup after being handed a dream draw.

Japan’s ‘Nadeshiko’ — named after a frilly pink carnation — will be expected to brush aside Switzerland, Cameroon and Ecuador in Group C games that their coach Norio Sasaki said would serve as useful practice as they look to bloom at the business end of the competition in Canada, which begins next June.

“If you see the teams on paper, yes they do look like easy opponents,” Sasaki told local media after Saturday’s draw, which pitted the Japanese against three first-time qualifiers.

“But we won’t disrespect any side. It will be important to finish top of the group in style and for everyone to be focused on going on to win the title again.”

Japan stunned the United States in a penalty shootout in 2011 to become the first Asian world title winners at any level, embodying the iron-willed spirit of a nation battling to recover from a deadly tsunami and resulting nuclear crisis earlier that year.

Sasaki’s side added the Asian Cup earlier this year, having been pipped to the gold by the US at the 2012 London Olympics.

Germany, who won in 2003 and 2007, could also breathe a sigh of relief at their draw in Group B, which includes 1995 champions Norway but also inexperienced Ivory Coast and Thailand.

Brazil, led by five-time women’s world player of the year Marta, launch their bid for a first World Cup crown against South Korea, fast improving Spain and Costa Rica in Group E while France, ranked fourth in the world, take on England, Colombia and Mexico in Group F.