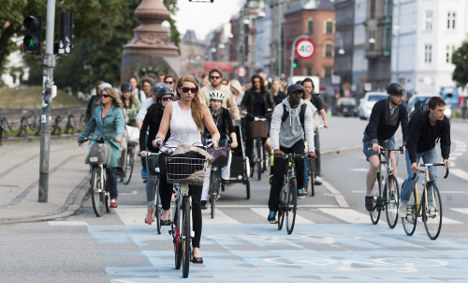 Danes in Copenhagen. Photo: TT
In an interview with Danish newspaper Politiken over the weekend, former Swedish PM Fredrik Reinfeldt criticised the Danish government’s plans to make resident permits for refugees temporary, saying that there is plenty of room in the Nordic countries to permanently house people fleeing oppression and war.
Reinfeldt also used his interview to criticise Sweden's nationalist party, saying:
"There is no place for the Sweden Democrats on the 'borgerlig' (liberal/conservative) side of Swedish politics".
Discussing immigration across the Nordic region, he said:
"What does the word 'enough' mean? Is Sweden full? Is the Nordic region full? Are we too many people? We are 25 million people living in the Nordic region. I often fly over the Swedish countryside and I would advise others to do. There are endless fields and forests. There's more space than you might imagine. Those who claim that the country is full, they should demonstrate where it is full," the former Swedish leader said.
Read more on The Local Denmark
But Danish politicians have failed to jump on board with his plan to welcome more refugees to the region.
“This is the first time I’ve heard that a country’s geographic size should determine how many people from distant lands can fit in. That’s a new one for me. But space is not the problem – the problem is that we have huge economic and cultural challenges,” Martin Geertsen, the integration spokesman for opposition party Venstre, told Danish media outlet BT.
Reinfeldt also made what seemed to be a thinly-veiled jab at the Danes’ strict immigration policies by saying that he distances himself from “those who think that security lies in everyone being the same, being homogenous and keeping out those who are different”.
Mette Reissmann of the ruling Social Democrats also dismissed Reinfeldt’s criticism.
“We are not Swedes. We are Danes,” she told BT, adding that Denmark doesn’t share Sweden’s goal of being seen as a “humanitarian superpower.”
“We have the ambition of doing what is right for Denmark. It is about finding a balance, and that’s why we have a law proposal that will tighten our asylum policies,” Reissmann continued.
Danish politicians have previously expressed strong concerns that Sweden’s generous asylum policies will affect Denmark, as citizenship agreements between Nordic nations allow refugees who obtain Swedish citizenship to move to Denmark without a Danish resident permit.