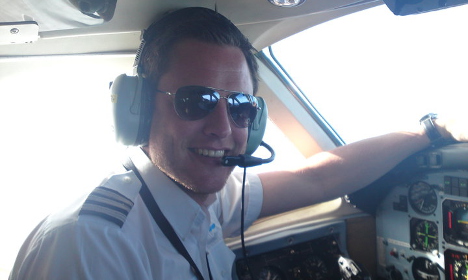 For as long as he can remember, Robin Allen has had a fascination with aircraft. He went to his local airport as a kid to sit and watch the planes, “thinking it was totally cool”.

He landed himself a scholarship with the Royal Air Force in the UK, working as an engineer before joining his first flight inspection company in 2007 – a job transition that came about completely at random.

“I applied for a job as a ground engineer technician but during the interview they told me I was in line for a flying job. It wasn’t something I originally went after – but it’s my dream job,” he tells The Local.

Today, Allen is one of just 300 flight inspectors in the world. Now based in Norrköping, just south of Stockholm, he tests all navigation aids used by civilian and military aircrafts in Sweden, Norway, Denmark, and Latvia.

IN PICTURES: What's it like to fly planes in Sweden?

After a month in Sweden, he has retained his good-natured British banter.

“I make sure that planes land on the runway and not in the bushes. I think of myself as a bit of a hero. If I’m rubbish at my job, people die. That’s what I tell my grandmother,” he says tongue-in-cheek.

Airports need to make sure instrument landing systems are safe, something that’s most commonly done every six months. A safe landing system depends on signals from the aircraft matching exactly with aerial signals on the ground, allowing the pilot to judge height and distance when taking off and landing, whatever the conditions.

By checking the coverage, Allen can see how far out the aircraft can receive a signal and what the quality of that signal is, and then in turn how good the quality of the landing guidance is.

“My office is basically in the air – it’s the best of two worlds, I get to fly and do engineering,” he says. But his career path hasn't always been easy. Earlier this year, Allen decided he was sick of flying and constantly being somewhere else other than home and considered taking a different direction.

It wasn’t until he stayed away from soaring the skies that he realized his true passion for his trade.

Still wanting a new feel and adventure of some kind, he opted to base himself in a new country and found a job in Sweden in October 2014.

As a relative newcomer, Allen’s days have mainly been filled with work and going to the gym – where he admits to have dropped the weights a few times, while checking out fellow trainers.

“I've realized that Swedish women are ridiculously hot. But I have my work cut out for me, the men are a lot more stylish than us Brits.”

He says he hasn't had too much trouble settling into his new town, but finds it best to take each day as it comes.

“I don’t really do planning. When I make a plan, it gets boring. I’m here indefinitely. As far as I’m concerned, I’m living here. It’d be nice to meet someone and see what happens,” he says.