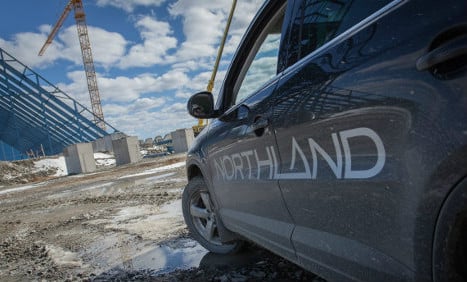 The mine operated by Northland Resources in northern Sweden. Photo: Tornadalenmedia/TT

The firm operates an iron ore mine in northern Sweden and board members have been trying to drum up investment over the past 18 months.

Last May it secured financing from a group of Swedish entrepreneurs but further attempts to secure capital have floundered.

"The company and its employees have done an impressive job in developing a professional and modern mining operation in a very short time.

"It is therefore sad that the dramatic fall in iron ore prices this year made it impossible to raise the required financing, which was a prerequisite for continued operations,” said Olav Fjell, chairman of the Northern Resources Board in a press release.

The Reuters news agency reported that the company was more than $650 million in debt and that it was "plagued with cost overruns."

Trading on the company's shares and bonds have been halted since December 5th and will remain so as bankruptcy proceedings continue.

The Swedish companies which invested in Northern Resources last year, Folksam, Metso, Norrskenet and Peab, will be affected by the decision.

Even before the bankruptcy announcement, the market value of the investment by the insurance company Folksam, estimated to be 130 million kronor ($17.1 million), had already decreased in value by 34 million kronor.

"Of course it it is a lot of money. But you have to bear in mind we have over 340 billion in total assets so this is a very small part of overall investment," Christina Blomkvist, company lawyer with Folksam told the TT news agency.

The iron ore mine in Kaunisvara in Pajala municipality employs some 800 people, of which 450 work directly with extraction, the rest in logistics. There are also mechanics and other auxiliary staff at the site

Northland is a producer of iron ore concentrate, with a portfolio of production, development and exploration mines and projects in northern Sweden and Finland.