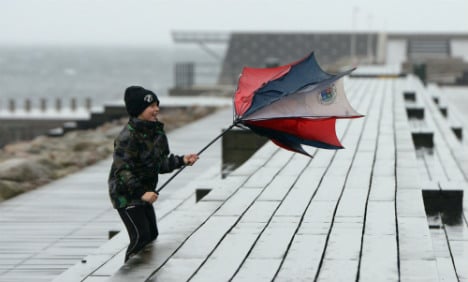 A boy in Malmö during a previous storm in 2013. Photo: Johan Nilsson/TT

Southern and central Sweden look set to bear the brunt of the gales. Weather experts have said the conditions are connected to a deep low pressure swirling over the Atlantic.

Not only will there be windy conditions but there will also be spells of snow in the north and rain in the south. On the west coast the forecast is for 10 to 15 millimetres of rain to pelt down.

By Friday things will have a taken for the worse with a storm expected to make its presence felt.

"It might be one of those storms that gets its own name," said meteorologist Åsa Rasmussen who works for Swedish television network SVT.

The gales are expected to be felt at its strongest in southern Sweden after the period of low pressure sweeps in from the southwest coast. It's thought that the wind will cause more havoc than the predicted snow and rain that will accompany it.

Rasmussen said "hurricane" style winds may be felt in the Skagerrak strait. The storm will then head east between Friday and Sunday with snowy conditions to come in its wake.

Earlier on Monday the Swedish weather agency (SMHI) issued a warning about slippery weather conditions after a spate of accidents in the west of the country. Motorists have been urged to be extra careful and wary of black ice.