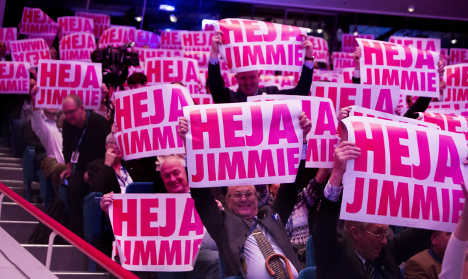 Fans of Sweden Democrat leader Jimmie Åkesson. Photo:TT
The poll suggested that if there had been an election last week, almost 18 percent of voters would have selected the nationalist party, compared with 13 percent who chose to vote for them at the last general election.
Support for Prime Minister Stefan Löfven's party dipped slightly, with 29.6 percent of people saying they would vote for the Social Democrats, compared with 31.1 percent in September.
The study also suggested that all of the centre-right parties are experiencing a small drop in voter support.
"It is clear that the Sweden Democrats could benefit from an early election," said Stina Morian from YouGov in a statement.
She added that the latest survey came at a time when the nationalists had had a huge amount of media exposure, with many opportunities to talk about their key issues unchallenged.
But she said the poll nevertheless indicated that the party could continue to increase its support ahead of Sweden's snap election in March 2015. Image: Datawrapper
The YouGov study followed other research by pollsters Sifo which suggested that 17 percent of voters have a more positive view of the nationalist Sweden Democrats now than they did before Prime Minister Stefan Löfven called a snap election.
But the research also showed that almost 40 percent have a 'more negative' view of the group, which wants to see a drastic cut in immigration to Sweden.
The poll looked at which parties respondents had previously voted for and found that those who had selected the Social Democrats or the Green Party in September’s election had tended to become more hostile to the Sweden Democrats.
It showed that previous Sweden Democrat supporters and centre-right voters had developed more positive views.
Political commentators responding to the Sifo survey on Sunday night said that the poll suggested that opinions remained polarized in Sweden and that it was unclear if the Sweden Democrats were set to increase their support in the snap election scheduled for the spring.
Both polls questioned more than 1000 people from a representative sample of Sweden's voting population.
The new election was announced after Sweden's coalition failed to get its budget through parliament last week amid a political crisis. This occurred after the nationalist Sweden Democrats broke with convention and sided with centre right parties in order to block the government’s budget.
The Sweden Democrats are the third largest party in the country and have a ‘kingmaker’ role in parliament, where the Social Democrats lead a minority coalition government along with the Green Party.
On Sunday night, Prime Minister Stefan Löfven was interviewed on Swedish news network SVT and asked if he had exhausted all other options before he called an election.
As in previous interviews, he criticised the centre-right opposition Alliance parties for what he said was a “lack of cooperation” over his failed budget.
He warned that the Sweden Democrats “will trap any government that does not do as they say”.